Posted by Stephen Humphries at 11:04 PM No comments:

Seriously. No exaggeration. I've seen (and own) a large number of concert movies by different bands -- including a few by U2 -- but I've never experienced anything as astonishing as the U2 film in IMAX 3-D. ("U2-3D" is now in release in the US; opens in the UK/Ireland on Feb. 22.) I saw two awesome concerts on the Vertigo tour and I'd venture to say this is even better than the real thing.

Over the 14 songs, the high-definition camera work -- so crisp that you can count the threads on Edge's woolen cap -- places you on the stage as if you were the fifth member of the band. At other times, you're floating just above the musicians so that you can glance down at the setlist taped to the boards or the box of Kleenex next to Larry's drum kit. There are also viewpoints from inside the crowd with people hoisted on shoulders in front of you.

The 3-D stuff is never gimmicky, though. The camerawork is always used in service of immersing the viewer in the concert experience. The depth of field and the three dimensions are so different from watching a regular movie, when one feels one step removed from what's happening on screen.

And then there's the fourth dimension: The sound. The volume is at concert levels, but the digital recording is so remarkably clear that each it picks up every timbre of the snare drum, each shiver of the bottleneck on the fretboard, and the isolated vocals of Bono and the Edge during harmonies.

The performances are as good as the band gets (Bono's great vocals make up for his strained voice on the official "Vertigo: Live in Chicago" DVD) and the vantage point of the film really allows one to feel the interplay between the musicians in a way that one never gets to see from beyond the stage.

More than anything, it's the Edge's show and gives one a renewed appreciation of his distinctive style.
The guitarist really shines during my favorite section of the show is the trio of "Love & Peace," "Sunday, Bloody Sunday," and "Bullet the Blue Sky." The latter song has never left the U2 setlist since 1987 and they add fresh twists to it each tour. This time, Edge plays a blazing solo that's pure blues as the video screens depict F-15 fighters soaring overhead. I recall turning to my wife in the cinema and saying, "WOW!"

There was a common refrain to the many overheard conversations on the way out of the theater: "I want to see that again!" This film really does raise the bar of concert filmmaking.
Posted by Stephen Humphries at 10:35 PM 1 comment:

Email ThisBlogThis!Share to TwitterShare to FacebookShare to Pinterest
Labels: U2; concerts

The show musn't go on Amid all the tremulous talk of the Oscars being canceled as a result of the writer's strike, there's one option I've not seen anyone mention: simply postpone the ceremony.
If talks between the WGA and the Alliance of Motion Picture and Television Producers don't resume soon, the Academy of Motion Picture Arts and Sciences oughta put the gold statues on ice and wait it out. Will anyone really mind if the red carpets are only unfurled come spring or --jeepers! -- summer?

Well, yes. All those actresses putting in double shifts at Pilates studios to fit into their Zac Posen and Badgley Mischka gowns may feel a little miffed. And the studios hoping for a boost for specialty films currently in theatrical release stand to lose in the short term if the Kodak theater has to be rebooked. Then again, the film companies could time their DVD releases to coincide with the reskedded show. Actors would also be able to rejoin the campaign trail of the late-night talk shows to stump for their nominations.
Otherwise, it's a win-win for everybody. The actors, directors, and other talent -- including, let's not forget, the writers themselves -- wouldn't have to face the conundrum of crossing the picket line for that rare chance to win an Oscar. Or send in their acceptance speeches via video, like Tuesday night's People's (bad) Choice Awards.
Whatever its decision, the Academy oughta make their plans known soon, since many businesses plan for the event in advance and will make substantial losses without advance warning of a postponement. (And Joan Rivers will need enough advance notice to schedule an embalming.) 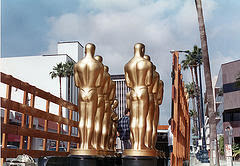 In the short term, one winner from all this will be the BAFTA awards. The glamorous British ceremony, hitherto a perennial also-ran function, now stands to fill in for the Golden Globes as the New Hampshire primary of this Hollywood election cycle.

Posted by Stephen Humphries at 12:32 AM No comments: 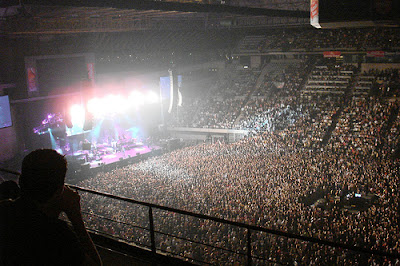 There's one sector of the entertainment industry that may benefit from the Hollywood writer's strike: the concert business.

As script-starved networks offer reality TV shows in which He-Men (and She-Men) hit each other with giant marshmallowy earbuds, it's conceivable that many younger adults will opt for entertainment alternatives such as inexpensive concerts -- the hotel-café tour, for example. That's further good news for an industry bathing in the minted glow of yet another gangbuster year. Indeed, while 2007 CD sales were flatter than Amy Winehouse's new hairstyle, the concert business is the one area of the music biz that's happier than a Boston sports fan.
With the prospect of a Led Zeppelin tour still in the offing, not to mention tours by U2, Coldplay, Radiohead, Carrie Underwood/Keith Urban, the Eagles, Bruce Springsteen, and Madonna, concert promoters stand to rake in more money per day than a Ron Paul fundraiser.

That's particularly true for Live Nation -- who have filed for divorce from Ticketmaster -- as they look to capitalize on their contract with Madonna and enlist artists such as the Jonas Brothers in so-called "360 deals" that cover record sales, merch, and tours. (To some, a deal that even Robert Johnson would have turned down at the Devil's crossroads.)
Still, there's one more potential spoiler on the horizon, one even more troubling than the prospect of Meatloaf's return to touring. Inflation. Though concert tickets barely rose in 2007, retail prices are soaring and there's talk of a recession. Faced with the sticker price of $450 golden circle seats for a Madonna show, the option of staying home to watch "American Gladiators" may not sound that bad after all.
Posted by Stephen Humphries at 10:58 PM No comments:

The greatest TV show ever 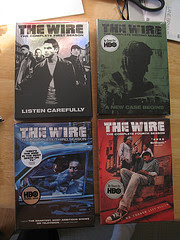 Like Martin Tupper, the character of HBO's long-gone adult sitcom, "Dream On," much of my formative years as a kid in the 1980s were spent watching television. Looking back on those years, I've come to fully appreciate just how far television has come as a medium because, apart from a few truly great shows -- "The Cosby Show," "Hill Street Blues," and "Wiseguy" -- the tube's Lo-Def days were dominated by the likes of "CHiPs," "The A-Team," "Knight Rider," and "Mr. Belvedere." I may have thrilled to "Airwolf" as a kid but, with adult hindsight, I now believe that The National Archives would sooner house all 11 episodes of "Cop Rock" before they would consider Jan Michael Vincent's helicopter Rambo.

Fortunately, television has now entered something of a golden age. The best writers in Hollywood are now working on the small screen where they have freedom to develop more complex story lines with more finely developed arcs than they could ever pull off in a 120-minute movie. Among the great shows in recent years: "Veronica Mars," "Friday Night Lights,""Battlestar Galactica," "30 Rock," "West Wing," "The Sopranos," "Arrested Development," "Firefly," and, ­when it's good, ­"Lost."

But there's one show that towers above all these others. One that has become my favorite show of all time -- HBO's "The Wire."

The series, which begins its fifth, and final, season today, is a realistic look at the war on drugs in Baltimore. For so long I'd heard TV critics hail this drama, which is created by an ex-Baltimore Sun reporter and an ex-Baltimore cop, as the best show on television. They weren't resorting to hyperbole.

It's sorta like "L.A. Confidential" meets "The Untouchables" meets "The Departed." But much more realistic in tone than any of those stories. Without being preachy, the show offers up a multifaceted portrait of Maryland's urban center with unflinching observations about the underclass, the politics of city hall and the police department, and the decay of institutions such as the school system. And all with great humanity and even dour streaks of situation-based humor.

I've never been as deeply invested in characters as I am with the ones on this show. Each one ­ -- there are about 20 major roles -- ­ has his or her own unique voice, and each one of them is so richly developed that other characters in movies and TV shows will strike viewers as utterly one dimensional but comparison. It helps that the actors, who look more like "ordinary people" than Hollywood stars, are all unknown. (Or were. Idris Elba is a star in the making and Amy Ryan is favored to win Best Supporting Actress at the Oscars for "Gone Baby Gone. they're all unknown actors and they all look like ordinary people, not Hollywood stars.) The character arcs are unpredictable, messy as real life, and immensely satisfying. It plays like great literature. As such, each season has its own theme. The third one, for instance, is about whether institutions and individuals are capable of reform.

Most of all, it's a damning indictment of the unwinnable war on drugs. "It's a fraud," "Wire" creator David Simon told Reason magazine. "It's all over except for the tragedy and the shouting and the wasted lives. That'll continue. But the outcome has never been in doubt."

The fourth series, new on DVD, is the best yet. As Stephen King opined in Entertainment Weekly, "The Wire keeps getting better,and to my mind it has made the final jump from great TV to classic TV - put it right up there with The Prisoner and the first three seasons of TheSopranos. It's the sort of dramatic cycle people will still be writing and thinking about 25 years from now."

Which is more than can be said of "Airwolf"...
Posted by Stephen Humphries at 10:24 PM 1 comment: