Posted by Stephen Humphries at 12:24 PM No comments: 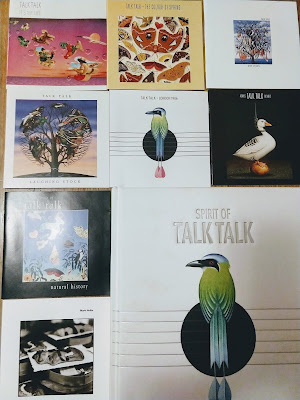 The thing about rock stars is that we somehow expect them to live forever. We often forget that these musical gods are mere mortals. So when they die, we're seldom prepared for the news when it comes.

On Monday afternoon, I saw a tweet on Twitter that Mark Hollis of Talk Talk had died. It wasn't an official announcement—it was something more like a rumor. It seemed hard to believe. He was only 64 years old. But, since Hollis quit his professional music career 18 years ago, he's been so elusive, his life so private, that it's almost as if he had completely disappeared off the planet. No one knew anything about what he'd been up to. I imagine that Hollis was one of the inspirations for Nick Hornby's excellent novel Juliet, Naked (recently made into a movie) about a fictitious musician who mysteriously packed it all in and hadn't been heard of, let alone spotted, for decades.

By all accounts, Hollis was quite humble and quite ordinary in his down-to-earth nature (he wasn't the sort of exotic alien species of rock star like Bowie or Prince). Yet his disappearance and disinterest meant that fans bestowed upon him a mythos, a certain mystique—qualities that also apply to Talk Talk's utterly timeless music. During all those years since Hollis had exited the public square, I held out a faint hope that he'd pull a Kate Bush and announce a surprise shows as a solo artist or with a reunited Talk Talk. I would have flown cross-Atlantic for those shows, just as I did with Kate Bush. (Btw, few people know this but Hollis and Bush briefly tried writing in the studio together in the 1990s but it didn't work out. A shame. That tantalizing partnership remains one of music's great what ifs?) But Hollis was the rare artist who had little interest in returning for a cash-in reunion, writing a memoir, or producing a comeback album for the Spotify generation.

So when word of Hollis's death spread on Twitter on Monday and the confirmations began to arrive, I sat down at my laptop and spent three feverish hours writing a lengthy obituary/appreciation for Under the Radar magazine. (The piece doesn't flow and breathe the way I would've liked but it was a rush job to get something up on the website.)

it was a sad moment for an ardent fan such as myself. The finality of the selfish wish for a return of some sort so that we could have more of his remarkable gift.

...But he'd already given us so much. He endured a torturous experience in making of The Spirit of Eden and Laughing Stock. (Things were so bad that engineer Phill Brown's wife told him that if he did that if he ever spent that many months locked in a studio again that he could move out.)

So it's best to be grateful to Hollis for those beautiful works he created for Talk Talk and as a solo artist. They include five albums that don't sound dated and whose qualities ensure that they will remain timeless masterpieces.

In my email to Toby, I expressed how much it would have meant to Mark Hollis if he could have seen all the love and affection in the tributes to him. Toby responded, "Mark wouldn't care about any of it. Its a nice thought but he was really beyond all praise and adulation of any kind. He did it and moved on."

Fans such as Toby and myself will find it harder to move on. Thank you, Mark, for creating transcendent art that has affected so many of us inside the most intimate part of our souls.

Posted by Stephen Humphries at 10:51 PM No comments: