A music app called Spotify has changed my life. It'll change yours, too. This Swedish innovation -- currently only available in parts of Western Europe -- is a virtual jukebox that allows users to listen to almost any song in the world without paying a dime. Legally, too.

I recently wrote a story about Spotify, which you can read in its entirety here.

Thought I'd post the entire email interview I did with Spotify CEO Daniel Ek, below, which delves into a few realms I wasn't able to cover in the 1,000 word story.


* I’d love to hear about your experience using your own product. What are you currently listening to, and have you discovered any new artists/albums as a result of browsing or through a shared play list?

Hi Stephen. Where do I start? I’ve been listening to so much music recently and have a lot of fun sharing playlists with friends. Recently I’ve been listening to the likes of Passion Pit, Fleet Foxes, the Yeah, Yeah, Yeahs, Lemon Jelly and Sigur Ros, and I’ve just discovered two gorgeous albums, one by a Scottish band called Aberfeldy and a Swedish outfit called Loney, Dear. And I can never hear too much Daft Punk.

I love the way users are so creative with their playlists. You can find anything from all the UK’s Number One’s since 1957 to movie-inspired playlists, and people have even set up websites specifically listing playlists, such as http://www.sharemyplaylists.com/ .

As a specific example, I love the way you can be watching a movie and hear a really powerful song that sticks in the mind. With a quick bit of searching you can find that tune and play it instantly. For instance I watched “Waltz With Bashir” the other day and was instantly struck by this song “Max Richter – The Haunted Ocean 1.”

Plus little features like this can be a lot of fun when sending to friends http://www.spotify.com/blog/archives/2009/06/12/hints-tips-–-link-to-a-specific-track-time/

* When you first approached the major record labels with your idea, what was their initial reaction, and what sold them on the idea?

It was quite a long process. We launched Spotify in 2006 and it took two years traveling round the world meeting everyone from the janitor to CEO! We convinced them by explaining that you beat piracy by having a better product - and not by shutting them down. In the end it's about giving the consumer what they want and the way forward is to monetize through advertising, subscriptions and merchandising.

* What’s in it for the record companies? While Spotify offers the potential to reduce, if not eliminate, music piracy, the record-label business model is largely based around sales of a physical CD or a digital file. But Spotify could render such purchases largely unnecessary. While music labels stand to make money through licensing of their content and revenue share, don’t they stand to lose more money through further cannibalization of sales of MP3s and CDs?

We set up Spotify with the fundamental aim of providing a sustainable revenue stream for artists and the industry as a whole. If the music industry continues to haemorrhage money through piracy as it has in the past decade, there may not be an industry left in ten years' time. Right now 95 percent of all downloads are illegal, and we're looking to take this 95 percent of music fans and bring them into a user-friendly, legal environment where they can get exactly what they want while also contribute money back to the artists by either listening to ads, subscribing to the service, purchasing downloads or in the near future buying gig tickets and merchandising on Spotify.

Also from what our users have been telling us, they've discovered a lot of new artists through Spotify, whether by being sent new playlists by friends or simply by dipping into the service. Maybe they heard a cool song on House MD, checked out the artist on Spotify and then bought the album, or sought them out in an upcoming concert. Many tell us they still enjoy buying CDs or downloads - and in some cases buy even more than before as they're listening to lots of new stuff.

* You’re using Ogg Vorbis files -- how does the sound quality compare to MP3s?

They’re basically equal to a higher quality MP3 – and you’d need an expensive system to hear the difference between them and CD. We’re also working on ways to offer even better quality sound than MP3 in the near future. Watch this space!

* I’m really impressed that there’s no buffering wait time to listen to a track -- from an innovation standpoint, can you explain how you use peer-to-peer technology and each users’ local bandwidth to create effortless streaming?

Thanks, Stephen. We built Spotify to be quick and easy-to-use – and we felt that to achieve the best service Spotify should be run as an application, as opposed to a web-based service, which can be restrictive performance-wise.

Essentially Spotify is a hybrid model, streaming music centrally as well as incorporating peer-to-peer technology, which allows the music to be played instantly.

* What do you see as the major difference -- and competitive advantage -- of Spotify over Last FM, Pandora, Napster, or Rhapsody as a way to listen to, and discover, music?

We honestly don't feel there's a direct competitor to Spotify as no one’s doing exactly what we're doing at the moment. We're just focusing on developing the best product we possibly can. Our biggest competitor is illegal music downloading – so piracy is arguably our most serious challenger.

* Do you envision a future in which an artist/band can use your
platform as a way to communicate directly with fans -- much in the way they currently use MySpace to post blogs and updates and photos? And will Spotify expand to incorporate other social networking capabilities in future?

On both fronts, yes. We definitely envisage incorporating social networking capabilities, as well as looking at ways of expanding the client to allow artists to talk more directly with their fans. It’s also worth noting that we've just struck a deal with Ditto Music which allows unsigned acts to get their music onto the service and receive revenues.

* What sort of bonus features can Spotify subscribers expect in future?

Well I guess by now you’ve heard about our upcoming mobile launch. You can see the Google Android demo here http://www.youtube.com/watch?v=7ALGPknOsiU

We’re looking to launch across all mobile platforms in time, including the iPhone. Above that, we’ll be looking to launch more functions across the board, especially for our Premium subscribers. This may include, amongst other things, deeper download integration, more social features and some deeper discovery technology.

* Will recorded music become an essentially free commodity in the future?

I believe the majority of consumption will be on a music access, all-you-can-eat basis, which is what we offer, as opposed to outright ownership. That’s not the same as being free – if you look at Spotify’s Free service available here in Europe, users are in effect still paying with their time by listening to the commercials. There needs to be some kind of revenue stream established as although touring, merchandising etc will play an increasingly important part, you stilll need to monetize the music in other ways.

In terms of access to music over ownership, some people will continue to want to own their favourite music. Many continue to love the unique look, feel and sound of vinyl. On the download side, we think the format could be developed further, for instance by adding a visual element.

* Spotify was dubbed an “iTunes killer” by the New York Times. Certainly, once mobile devices -- including the iPhone -- are able to carry around Spotify's unlimited jukebox, it would seem to obviate the need for an iPod and iTunes. What’s your take on that?

We honestly couldn’t' say and don't benchmark ourselves against iTunes.

* Finally, how come Spotify isn’t available in the US?

We’re coming.
Posted by Stephen Humphries at 4:07 PM No comments:

Radiohead knows a thing or two about ditching accepted formulas. After all, this is a band that once wrote a song called "2+2=5." Today, the British band released a new song, believed to be titled "These Are My Twisted Words" (above) onto a P2P site. It may herald a bold move to eschew the album format altogether in favor of periodic single releases.

I assume that the band leaked the track intentionally -- much as Marillion released their last album to piracy sites first -- in a canny bid to create a flurry of publicity. The release date tag on the MP3 seems to indicate that the song was due for an official release date of Aug. 17 and the metadata includes a cryptic ersatz poem:

(Some have interpreted this as an anti-music label message.)

Just last week, Thom Yorke told The Believer, “None of us want to go into that creative hoo-ha of a long-play record again. Not straight off. I mean, it's just become a real drag. It worked with In Rainbows because we had a real fixed idea about where we were going. But we've all said that we can't possibly dive into that again. It'll kill us.”

But at Neil Finn's concert in London on Monday, featuring an all-star band that included Ed O'Brien and Phil Selway, Finn told the audience that Radiohead had been rehearsing songs from its new album just days before his gig. (I'm interviewing Neil here in LA on Monday for FILTER magazine, so I'll see if I can find out any more details.)

Bottom line: It's likely that Radiohead will release the "Wall of Ice" EP on Monday and will showcase the new material at its UK festival appearances this month.

Does this mean that Radiohead will only release one-off singles and EPs -- possibly just as downloads -- rather than full-length albums? It would be a bold step, indeed, if they eschew the album format, something Thom has talked about for quite a few years.

I commend the idea of abandoning the tyranny of the album format in favor of just releasing singles. Unfortunately, few artists nowadays are able to create entire filler-free albums that work as a cohesive listening experience. Ironically, though, Radiohead are one band boasts an instinctive grasp of how to create great LPs.

If Radiohead only releases individual songs from here on -- to wit, last week's release of "Harry Patch (In Memory Of)" -- it will be a return to the music model of the '40s, '50s, and early '60s when singles were the primary format. Only later, when record companies released hit singles onto 78 inch vinyl, did bands start to think about creating albums as entities in their own right.

I could envision a scenario in which Radiohead releases new songs/EPs online in a FLAC format and, later, compiles them onto a physical CD/vinyl for a traditional retail release. Again, a return to that early record-business model. I'll miss Radiohead's albums. But if this means more regular Radiohead releases each year, I'll be quite happy.

UPDATE: So, all that fuss for nothing. Well, not quite nothing. The band's Monday release of "These Twisted Words" as a free download (ta, lads!) is the second Radiohead song to be released in two weeks, so I can't complain.

Questions remain: Who leaked the track in the first place? Was it York? The Guardian did some good shoe-leather work to try crack the case.

In the meantime, Neil Finn tells me that they're in the "early stages" of making a new album.
Posted by Stephen Humphries at 4:33 PM No comments: 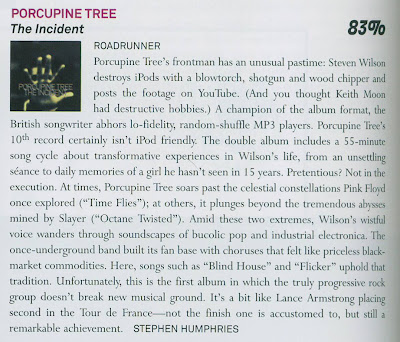 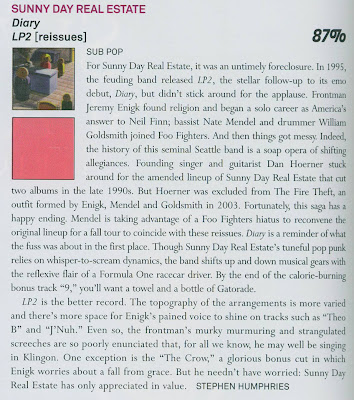 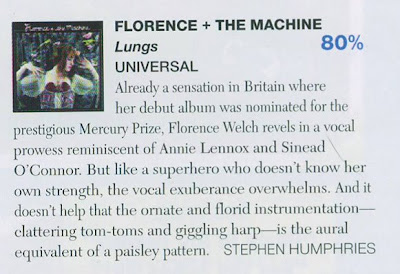 Posted by Stephen Humphries at 7:04 PM No comments: