Posted by Stephen Humphries at 11:23 PM No comments: 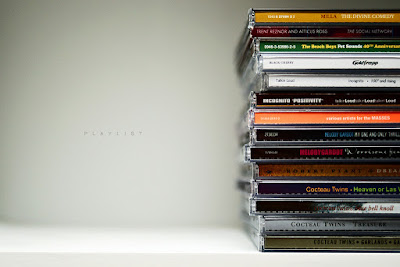 Joan Anderman, former music writer for The Boston Globe (before she voluntarily left to co-found the band Field Day), recently wrote, "I listened to records and went to concerts and decided whether they were good or bad, although as time went by, I began to worry that there's no such a thing as good and bad, only people who can persuade you that they know the difference."

I've been thinking along similar lines. As a professional journalist, I've reviewed a fair number of albums over the years and continue to do so (links to many of them are collected in the bottom half of the rail to the right of your screen). Lately, I've been wondering whether my opinions on music are worth a damn.

Music writers, both professional and amateur, typically present their reviews as some sort of objective truth. The critiques in professional publications carry the imprimatur of Official Truth. Words (and often grades) coming down from on high.

But they're not necessarily right or wrong. When you get down to it, music tastes are entirely subjective. That may seem to be stating the obvious, but many people will still claim that there are only two types of music, good and bad. And proclaim themselves reliable arbiters in determining which is which. If it were only that easy.

"But wait," I hear you object, "Are you telling me that Right Said Fred isn't crap? What about The Village People?"

In my opinion, yes. But, earlier this month I read an essay in The Guardian by British journalist and broadcaster Pete Paphides in which he wrote about how the song "Go West" by the Village People, later covered by The Pet Shop Boys, reduces him to tears. To my ears, it's a camp and cheesy song. But for him it's a song with a far deeper meaning about sexual freedom and its cost. about the American Dream. His essay reminded me just how subjective this stuff is.

Is there a role for music criticism, then? Music reviews don't matter the way they used to. Prior to the information revolution of the Internet, music writers wielded clout because their reviews typically arrived before the release of an album. It was more difficult, back then, to assess the music oneself because you had to wait for songs to show up on the radio or hope that you could listen to a release in a record store. Nowadays, music listeners would much rather decide for themselves by going to YouTube. Recommendations by peers and friends are far more influential than the scribblings of pro journalists. Indeed, the wonderful democratization of the Web means that we can all now be critics, whether it's on Amazon reviews or in the comments section under a YouTube video.

The best music writers, of course, are able to place music inside a historical context and offer observations about what, if anything, the writer is trying to say and how well they achieve that goal. (Great music writers can have a field day dissecting, say, the art—and artifice—of Lana Del Rey.) Music writers can also provide valuable signposts and recommendations to artists that one may have missed—curation is incredibly valuable at a time when there's an overwhelming number of new music released each week. I particularly love reading the stunning prose and witty observations of The Guardian's lead music writer, Alexis Petridis. And I never miss out on the weekly musings of music omnivore Andre Salles (a writer whose broad taste across genres resonates with my own tastes) over at Tuesday Morning 3 a.m.

Having said all that, never forget that every music critic is merely expressing an opinion. His or her critique is filtered through very subjective set of preferences—as well as his/her personal circumstances and what they're seeking from music. A song can strike one in very different ways depending on one's mood. A piece of music that never did anything for you at one time may suddenly seem incredibly moving and profound when you hear it at a different time in one's life. Same picture; different frame of mind.

That's not to say that music critics can't offer valuable and objective criticisms. (Though even these may seem subjective to some.) For instance, one can call out an artist if they've been lazy with the lyrics by resorting to "moon" and "June" rhymes or verses that don't make sense. Similarly, if the artist may not have progressed and may be repeating themselves. Or they may release an album that seems nakedly calculated to be a commercial hit rather than a personal statement.

...and yet many listeners will love those albums and songs because of, or in spite of, those very reasons.

What about guilty pleasures? Everyone has them. It's music that we'd blush to admit liking because we think it's something that we like in spite of what our head—and popular opinion—is telling us our response should be. Recently, the virtuoso art-rock guitarist Markus Reuter said something profound to music journalist Anil Prasad in an Innerview.

"When I hear people talk about 'guilty pleasures,' I think that concept is ridiculous. The peer group you belong to is usually why people think of certain music as guilty pleasures. Perhaps you belong to a group of people who like the goth scene, which means you can’t enjoy Eurodance. It’s largely to do with belonging to groups. Why should you feel guilty about enjoying something? I say come into the music with an open heart and indulge in the emotional experience. Don’t let the style of music, the sound or the scene influence what you feel when you listen to music."


I'm more wary, now, of casting aspersions on music that I hate yet others like. If you like Celine Dion, it would be churlish for me to complain if her music makes you happy or elicits an emotional response. If you're an ardent fan of Gloria Estefan and Miami Sound Machine I say, "Have a nice day...but please don't turn up the volume."

My music collection is filled with so many bands and artists that are terminally unhip and which others wouldn't rate as "cool." Everyone's taste is just as valid as mine, even when I'm sure they're wrong. Each and every person in the world can proclaim that they have the best taste in music—and I love that!

Posted by Stephen Humphries at 10:50 PM No comments: