Posted by Stephen Humphries at 10:28 AM No comments:

I went to see a Ryan Gosling and Harrison Ford movie for work... 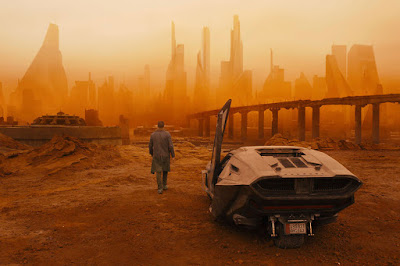 At the end of the original Planet of the Apes, Charlton Heston kneels in the sand, shakes his fist at the half-buried Statue of Liberty, and realizes that he’s doomed to live the rest of his life wearing just a loin-cloth.

As dystopian sci-fi movies go, that one's relatively cheerful. Nowadays, many science fiction books and movies depict a scorched-earth future in which life is nasty, brutish and short (well, unless there's a chance of a sequel). I wrote a newspaper article for The Christian Science Monitor about a debate within the science fiction community about the value of dystopian stories such as the newly released Blade Runner 2049.

In recent years, sci-fi writers such as Neal Stephenson, Cory Doctorow, Kim Stanley Robinson have been very vocal about how science fiction is fixated on apocalyptic scenarios for the future. They've largely displaced the hopeful visions of the future that were part of the so-called Golden Age of Science Fiction until the mid-1960s.

Stephenson believes that these pessimistic stories, which arose out of the New Wave of science fiction, have had a knock-on effect among scientists, engineers, and entrepreneurs because, he believes, it discourages them from thinking big and tackling daunting projects. But other sci-fi authors believe that dystopian tales not only serve a valuable and worthwhile purpose, but can also be just as inspirational. Daniel H. Wilson, the former robotics researcher who wrote the bestselling novel Robopocalypse, gave me a wonderful anecdotal example of the latter that I wasn't able to fit into my story.

“Having been a scientist and having lots and lots of friends who are scientists, I can tell you definitively that people are inspired by dystopias [and] they’re inspired by utopias,” Daniel told me. He cited an example of a former colleague at Carnegie Melon University who researched how to program robots to devise new methods of locomotion if they break a limb. His inspiration? The horrific scene in The Terminator in which the T-800 assassin robot (played by Arnold Schwarzenegger) crawls out of a burning inferno with all its skin burned off and exposed as a mechanical being. As Daniel put it, his friend was sitting there watching and thinking, “Wow, he figured out how to move without his legs!”

Side note: I asked Daniel H. Wilson about Elon Musk’s loud claim that Artificial Intelligence will come to view humanity as an inferior species and destroy us...like the plot of the aforementioned movie. (Here’s hoping that the coming fleet of self-driving Teslas don’t develop a grudge against backseat drivers.) His response? If you can find a single robotics researched afraid of singularity, call me!

You can read my article via this link...