Caught in the Filter 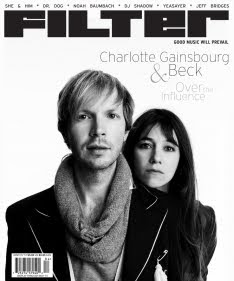 Now on newsstands, the new issue of FILTER magazine. Yours truly has several pieces in the magazine, including a feature on Jesca Hoop, whose excellent second album, "Hunting My Dress," is as gratifyingly unusual as it is full of great hooks and melodies. I also penned the issue's lead album review on Midlake's "Courage of Others" as well as a review of Shearwater's "The Golden Archipelago" (though flawed, it's my favorite album of the year from one of my very favorite bands). Also in the issue: interviews with Beck and Charlotte Gainsbourg, Jeff Bridges, She & Him, and The Besnard Lakes (the Montreal band's "And the Night Roared" is my second fave album of 2010 so far).
Posted by Stephen Humphries at 9:52 PM No comments: