Posted by Stephen Humphries at 7:21 PM No comments:

Is the music industry finally having its #MeToo Moment? 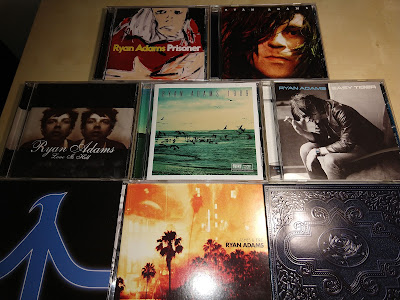 As assignments go, my latest Culture story for The Christian Science Monitor took a lot of digging to get people to talk.

My lengthy think piece explored whether the music industry is finally having its #MeToo reckoning now that Ryan Adams, R.Kelly, and Michael Jackson are finally being held to account. Over the past half year, groups such as The Orwells, Hookworms, Sorority Noise have disbanded following allegations of sexual misconduct by individual members. Sigur Ros and Real Estate parted ways with band members accused of, respectively, sexual assault and sexual misconduct. Industry titans Charlie Walk, Russell Simmons, and LA Reid have been fired following disturbing allegations.

I wanted to exploring what, if anything, has changed. It seemed to me that there's been a shift in power within the industry. And there's also been a shift in how the public at large views #MeToo abuses. (I took all the Ryan Adams albums I own—above—off my CD shelf and haven't had any desire to listen to them of late, though I will return to them some day. Just not anytime soon...)

And yet, even though the likes of Amber Coffman, Phoebe Bridgers, Lydia Loveless and Julia Holter have used their online platforms to name alleged abusers in the music scene, many others have remained silent about instances of sexual harassment, sexual misbehavior, and even rape. They're often afraid for their careers, especially those who are unknown.

As influential publicist Judy Miller Silverman of Motormouth Media put it to me, "Because the onus of coming out and trying to have a career is difficult because then suddenly you're beholden to male A&R people and label people saying, 'Oh, that's the musician that outed the blah-blah. She's trouble.' To keep your own career safe, you almost have to get to a certain place.  You need to be at a certain level in order to be secure or you're worried that your career is over before it's begun."

Judy also mentioned how difficult it is to be the first person to go on the record to name an abuser, hoping that others follow. "What if no one else comes forward and their accusation is hanging in the wind?" said Miller Silverman.

For my story, I wanted to talk to people in the industry who were victims. I put out numerous feelers via various contacts and...nothing. Well, not quite. I knew at least two people who knew victims but had no success in getting them to talk to me. And then, via a third contact, a woman decided to talk to me about her story. It took her three days to muster the courage. During our 90-minute interview, I think I forgot to exhale. This musician told me one helluva story about a famous rock musician, the full details of which I'm not able to reveal. She asked for anonymity because she's not a famous musician and she feared the "court of public opinion." Even so, she was very brave to tell me her story, one she hasn't told to many people. I only wished I'd had more space to tell the full tale. But you can read her story in my piece.

I have a feeling that there are going to be many more stories about #MeToo abuses emerging from the music industry in the coming months and years. In the wake of the Ryan Adams story, Juliana Hatfield noted in a tweet, "i imagine that a lot of rock star guys are scared right now.”

Posted by Stephen Humphries at 9:55 PM No comments: