Taking stock of 25 years of entertainment 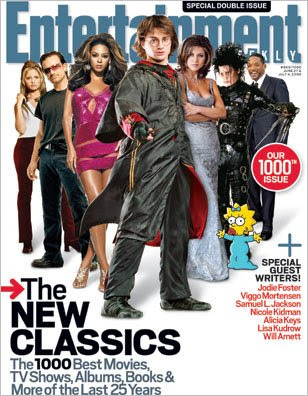 The most recent issue of EW is devoted "The new classics: The 1000 Best Movies, TV Shows, Albums, and Books of the past 25 years." (Whenever magazines do lists, it's because its a lean weak/month for newsstand worthy cover stars.)

Moviewise, not too many quibbles about EW's top 100 films, but there are precious few foreign films (unless you count "Lord of the Rings" as a New Zealand production). So, no "4 Months, 3 Weeks, 2 Days" or "Amelie" or "Jean de Florette," though at least "Wings of Desire" and "Crouching Tiger, Hidden Dragon" weren't forgotten. I'll forgive the omission of "Brazil" -- and the low ranking of "L.A. Confidential" -- because EW were good enough not to overlook "Children of Men."

Very sound books selections, though I still think "The Road" is overrated. True, Cormac McCarthy's spare, punctuation-free prose creates an unforgettable image of a post-apocalyptic future and the bond between father and son is tenderly evoke. But the story is too repetitive and its stubborn refusal to end with a proper climax is unsatisfactory on a basic story level.

The TV selections are near perfect, even if "The Wire" should have been ranked no. 1 rather than no. 11. There's no love for "Veronica Mars" or "Firefly" but somehow "Saved by the Bell" squeaked in at #100! Yep, the show that saddled the world with Tiffani Thiessen, Mario Lopez, and Elizabeth Berkeley. I've seen episodes of "Sabrina the Teenage Witch" that were better written...

To kick off the movie list for the next 25 years, can we start with Wall*E?
Posted by Stephen Humphries at 11:42 PM No comments: 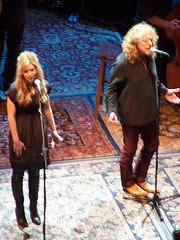 On Thursday night, the Boston Celtics basketball team took on the L.A. Lakers in its first NBA championship series in 20 years. But no one who attended the Robert Plant and Alison Krauss concert just a mile away would have traded the experience for the offer of courtside tickets. It was a unique experience. And not just because some folks were spotted playing air fiddle.

The duo sauntered on to the stage for “Rich Woman” to rapturous reception at the Boston Pavilion, a prime waterfront venue under a big open-air tent. A freezing night was just starting to heat up. Plant last played here with Strange Sensation in 2005. The third song of the night, “Black Dog,” was one Plant had performed on that night, too. This version – slowed down, yet punctuated by a ripping fiddle solo and drums that could have drowned out a July 4 night sky – was much better.

Plant left the stage to give Alison, dressed in thigh high boots and floral top, center stage for “Sister Rosetta Goes Before Us.” One marvels that this mere slip of a girl has such a huge voice. Elegant fiddle improvisations, too. It was unusual to see Robert at the rear of the stage as a backing singer but it nicely underscored the lack of ego in this project and the revue setup of the tour.

The show had been good up until this point. But it was time for Plant to return to the fore and turn up the heat. Picking up the mic stand and shimmying to the groove, he performed an urgent “Fortune Teller,” aided and abetted by Alison’s ethereal wail over the guitar outro. “In the Mood,” which I last saw performed in 1993, was a treat. Part way through it segued into a song I didn’t recognize before returning to the “Principle of Moments” highlight. Here, Plant tested the other end of his range, plunging to deep bass notes like Johnny Cash with a cold. Then, suddenly, Plant exclaimed, “I’M IN THE MOOD” and the crowd roared, encouraging the band to whip up a frenzy.

Plant, it turned out, was just warming up for what would follow. The duo’s version of “Black Country Woman” (another song I’d last heard performed in 1993) is astonishingly good, especially the dynamic when Krauss and the drums kick in. Voice fully lubricated, Plant started to cut loose, flipping he mic stand as he let out some of those signature “ooohs” and vocal ad libs.

Next, it was T Bone Burnett’s turn in the spotlight for “The Rat Age” and “Bon Temps Roleur.” He receives a massive cheer after Plant introduced him and further endeared himself when he declared, “I’m from L.A., but I hate the Lakers!”

As band leader, Burnett stalked the front of the stage all night, dressed in long black coat and holding his guitar at right angles to his body, he resembled a preacher with a machine gun. I must admit that I’ve never enjoyed T Bone’s solo records because, truthfully, he doesn’t have a great voice. What a great producer and player, though. The best part of Burnett’s solo spot was Jay Bellerose’s thunderous drum cadenza and Stuart Duncan’s scorching fiddle – one could see why he’s long been Alison Krauss’s favorite musician. Kudos to guitarist Buddy Miller – cover star of this month’s No Depression, a magazine about alt. country/Americana music – who is a stellar axeman. 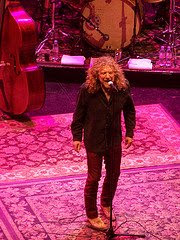 It would be tough for any performer to take to the stage after Krauss’s lovely renditions of “Green Pastures” and “Down to the River to Pray,” songs that showcased her perfect pitch and modulation. But, following a vibrant “Killing the Blues,” Plant was once again front and center, kicking the mic stand and moving around the stage as if he was fronting Zep at the 02 Dome all over again. He remains the coolest frontman on the planet. During "Nothin,'" which is far more up tempo than the album version, he let out the longest "ooooooooooooooooooooooooooooooooooooh" I've ever heard him do and then he did it again a second later, sustaining it as long but somehow going up a note when mere mortals would have been gasping for breath. Very reminiscent of “Kashmir” back in December. In the 18 times I’ve seen Robert in concert, this was song one of the most thrilling performances I’ve ever seen by him. The guitarists really rocked this one.

Next up, a surprise departure from the earlier setlists: A rocking version of Bo Diddley’s “Who Do You Love,” with Plant sharing his microphone with T Bone, in tribute to the recently departed father of rock ‘n’ roll. Robert played a hot harmonica solo, too. “He was like my uncle,” Plant said afterward.

“The Battle of Evermore” capitalized on this exciting run of songs, Plant tossing his hair during the powerful “bring it back” section. An inspired choice of song for the duo.

The band kept the pot boiling with “Please Read the Letter” and “Gone, Gone, Gone” (during which the band unveiled its sole stage effect all night, dropping the back curtain to reveal a gold lame backdrop) before heading offstage for the encore.

I didn’t recognize the next song, but it was one of my favorites of the night. “You Don’t Knock,” Kingston Trio song according to Google, saw Plant leadin 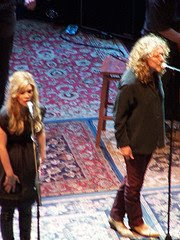 g the other male singers in the band like a barbershop quartet. If Robert were to record a followup to The Honeydrippers, it would likely sound like this. After “One Woman Man,” the mood shifted dramatically. "When the Levee Breaks" was so dark and ominous that it sounded like a murder ballad that even Nick Cave would have been scared to sing.

By the time Robert and Alison, who had been exchanging fond smiles all evening, hugged and then performed “Your Long Journey Home,” my Adams apple had bobbed a few times. A special concert. And, as if it wasn't already a great night, the Celtics won the game.

Posted by Stephen Humphries at 10:44 PM No comments: