From Raising Sand to raising hands 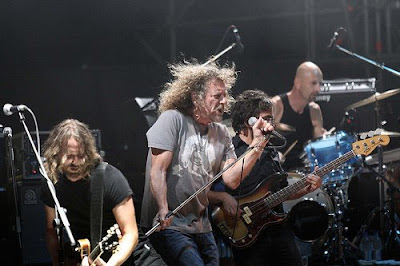 Longtime readers will know that my all-time favorite artist is Robert Plant. The singer, nicknamed Manic Nirvana by his manager, has long followed his musical instincts rather than the pursuit of fame, glory, and the almighty Dollar. Robert seeks zen in the now rather than nostalgia for the past, a prerogative he explained in detail when I interviewed him a few years back. It's made for a most unpredictable -- and thus hugely exciting -- musical career.

Plant's latest adventure: An unusual gig at the inaugural WOMAD festival in Abu Dhabi. Taking a break from recording with Alison Krauss (read about the followup to "Raising Sand" here), Robert spent a week holed up in a rehearsal studio in Bath as an honorary band member of Justin Adams and Juldeh Camara. Justin was the guitarist in Plant's erstwhile band, The Strange Sensation; Juldeh is a Gambian griot, and a virtuoso of an instrument called the ritti. On their dynamic 2007 debut, "Soul Science," Adams and Camara created trancey, groove-centered blues -- think Muddy Waters meets Ali Farka Toure. (Try this sample of "Ya Ta Kayaa.") A followup album, "Tell No Lies," arrives in May. When I interviewed Justin last year, he described the duo's holistic fusion this way: "If you look for the roots of rock 'n' roll, you find them in the blues. And if you look for the roots of the blues, you'll find it in West Africa."

This is the kind of thing Robert loves to do in his down time. By contrast, you'll find his contemporaries out on the golf course until, of course, they're forced to top up their bank accounts with another reunion tour.

Corrina Corrina
Posted by Stephen Humphries at 1:54 AM 1 comment:

Music for the masses

Talk about a block party. Last night, Depeche Mode shut down a large stretch of Hollywood Blvd. for a performance on the the Jimmy Kimmel show. Over 12,000 people showed up. (Everything counts in large amounts.)

Fortunately, I was able to get tickets from a generous friend who works for Disney. Since we had VIP access, we were able to avoid the long lines through security and walk right in and get a spot fairly close to the stage on the left side. Dozens of cameras on cranes all over the place. A stage with a decent light system had been set up with a screen at the back. On our side of the stgagem construction workers of a new building watched from the scaffolding. On the other side of the stage, the likes of Chris Martin and Christina Applegate looked on.

The band performed a rocking "Wrong" and then, after a commercial break, blistered through "Personal Jesus" with the crowd singing the "Reach out, touch faith" part. Gahan is a great front man who really knows how to work a crowd. Plus, dude looks effortlessly cool. Can't say the same for the leather-clad Martin L. Gore. Too much eyeliner and he'd tried to come his naturally curly hair in a flat-ironed flop that looked a little too Flock of Seagulls. Not flattering. But he played some great guitar all night and his backing vocals were perfect.

The band stayed on stage and performed "Walking in My Shoes," one of my all-time favorite DM songs. Then they played "Peace," which is one of the best songs on the new album, followed by "Come Back." On the album, "Come Back" is marred by too many electronic effects and abrasive noise. Underneath all this is a good melody that gets lost in the mix. But live it was tremendous. One of the best aspects of the new record is how the vocals of Gore and Gahan complement each other and they really captured that live.

Next, the band played "Enjoy the Silence" and the audience went nuts. They really jammed out at the end of the song with the drummer doing some interesting drum tattoos and Gore getting funky on guitar. The coda sounded almost like a remix of the song. Great stuff. Gahan thanked the crowd and announced the last song of the night as, "back where it all began." A few fans near us thought that meant they'd be playing "Somebody," but it was nothing that ancient. Gore started picking out a familiar guitar refrain: "Never Let Me Down Again." Gore made his guitar sound nice and dirty during this one while Gahan whipped the crowd up into a frenzied mass of waving arms. Best song of the night. A nice taste of the tour to come.

My take on "Sounds of the Universe": Better than "Exciter" and "Playing the Angel." But not by much.

"Wrong" is the best track. It's even better than "Martyr," the terrific single off the band's recent "Best Of," and even better than "Precious." Other highlight: "Peace," "Perfect," and "Miles Away," each boasting ear-pleasing choruses. There are several clunkers and a couple of other songs that I'd call "passable filler." As a whole, it's not a particularly strong record. Apart from the occasional great song now and then, Gore doesn't seem to be writing as many great tunes as he did in the '80s and '90s. The band's last really good album was "Ultra."

Unfortunately, Depeche Mode too often settles for Default Mode. Time for them to change up their sound. I'd like a producer to come in and have the band put away their synths and drum machines and instead bring in a live drummer and organic instruments such as vibraphone, hammered dulcimer, piano -- or whatever -- and try reinvent their sound. That process could be the creative jolt Gore needs to write stronger melodies again. I wouldn't count out Gore just yet. I never thought Robert Smith would create an album as stunning as "4:13 Dream" after the previous couple of Cure records. Late career comebacks are entirely possible.

Posted by Stephen Humphries at 2:40 PM No comments:

One fan film to rule them all

I've long been fascinated by fan films, largely -- though not exclusively -- a 21st-century phenomenon made possible by digital cameras and computerized special effects.

Before the democratization of filmmaking, the only outlet for homages of "Star Trek" or "Star Wars" or comic-book properties was underground fan fiction. Well, that, or going to an awful lot of trouble to create a shot-for-shot remake as three teens did in 1977. (Even now, it's still more impressive than anything in "Be Kind, Rewind.")

When I first wrote about Star Wars fan films in 2000, many of them were nearly as visually sophisticated as "The Phantom Menace" -- and far more entertaining. For starters, take a look at "Troops" or "Dark Redemption" or "Pink 5," for example.

Since then, numerous properties -- ranging from "Harry Potter" to "Buffy" to "Doctor Who" -- have launched fan films. If anything, these films arguably bolster fandom and fidelity to each franchise. (Sadly, EON, the owners of the James Bond copyright have been shortsighted in shutting down 007 fan films.)

Some of the most ambitious amateur homages in recent years have come from Trekkies because, prior to the J.J. Abrams film, production had ceased on new feature films and TV series. Some Trek fans went as far as creating their own exact replica of the original USS Enterprise bridge in order to create an online series that picked up where Gene Roddenberry's 1960 original series left off. Even more ambitious: "Of Gods and Men," an unofficial Star Trek indie feature I wrote about, hired a number of Star Trek alumni, including Nichelle Nichols (Uhura) and Walter Koenig (Chekov).

In short, I thought I had pretty much seen it all when it came to fan films. Turns out, I was wrong. A group of "Lord of the Rings" fans have combed through J.R.R. Tolkien's extensive footnotes to create a prequel of sorts to "Lord of the Rings." This just-released trailer (below) showcases impressive production values -- check out the Orc makeup! -- and an actor who, if you don't look too closely, bears an uncanny resemblance to Viggo Mortensen. (More about the film, which hits the Web on May 3, here.) I imagine Peter Jackson will get a kick out of this.

Posted by Stephen Humphries at 6:04 PM No comments: 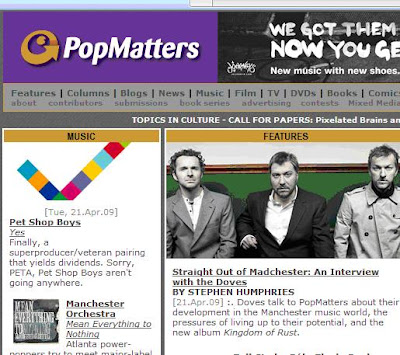 I have the lead story on Pop Matters today -- an interview with Doves. I last interviewed the band around the release of their debut, "Lost Souls," but have been keeping up with every release and tour ever since. In the interview, Jimi Goodwin explains why the trio's latest, took several years to make and why he still hasn't recovered from the birthing pains. The result is a fine record. Not quite the hyper leap I'd hoped for but, as a consolidation of their strengths, this is one I'll be listening to for many months. For starters, "Compulsion" and "The Greatest Denier" are shoo-ins for a future Doves 'Best Of.'
Posted by Stephen Humphries at 6:14 PM No comments:

Email ThisBlogThis!Share to TwitterShare to FacebookShare to Pinterest
Labels: Doves 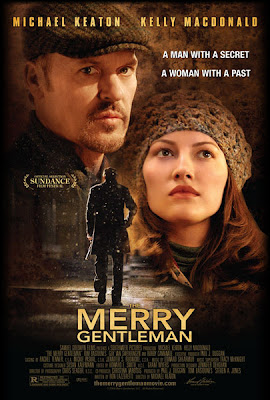 When I heard about Michael Keaton's imminent comeback movie, I sighed in annoyance. Not about Keaton's return itself, which is a welcome one, but his choice of vehicle, a small-scale movie called "The Merry Gentleman." Stop me when this plot synopsis sounds familiar: A hitman forms an unlikely relationship with.... Need I continue?

The "hitman with a troubled conscience" story was wholly fresh when Jean Reno took a young Natalie Portman under his wing in 1994's "The Professional" (aka "Leon"). The premise also made for a hilarious romantic black comedy when John Cusack's Martin Q. Blank packed up his rifle scope for a return to his high-school reunion in 1997's "Grosse Point Blank." But now there's a whole genre of films about assassins who have a heart of gold hidden beneath their kevlar vests. Ben Kingsley in "You Kill Me," Pierce Brosnan in "The Matador," Nicolas Cage in "Bangkok Dangerous," and now "The Merry Gentleman," a story about a hired killer who begins a relationship with a woman (Kelly Macdonald) who is getting over an abusive relationship. Time to put a hit out on this genre....
Posted by Stephen Humphries at 2:57 PM No comments: