Posted by Stephen Humphries at 5:26 PM No comments: 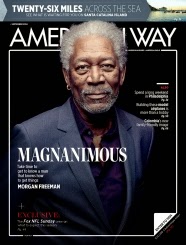 Earlier this year, blues rocker Joe Bonamassa showed up to play a sold-out show in Kingston, New York, only to be turned away at the theater’s backstage door.

“They changed the security guy and he tried to throw me out of my own gig. I said, ‘Dude, probably not good for business,’” Bonamassa laughingly told me when I interviewed him for the current issue of American Way, the in-flight magazine of American Airlines. (You can read the interview here.)

To me, the incident sums up the paradox of Joe Bonamassa: The 37-year-old is America’s biggest guitar hero since Stevie Ray Vaughan but he's hardly a recognizable name to most people. Blame the US media, which has scarcely profiled the guitarist even though he sells out 2-3,000 seat venues per night. (In Europe, he sells out arenas.) His last album went to number 23 on the Billboard charts. And, in Britain, it went all the way to number two, only missing the top spot by a mere 81 copies. Not bad for a blues rock album released by Joe's own record label.

Yet that feat barely garnered any press in the US. Joe's response to the apathy of most music journalists is a sigh.

“I’m not trying to be the hippest thing,” says Bonamassa told me. “I know my fanbase and what they want to hear. I don’t think we’re hip enough. I’m like Opie Taylor plays the blues in sunglasses and a suit. I’m not sure that’s edgy enough for them to brag about at their cocktail parties.”

Joe Bonamassa’s anonymity may not last for long: His eleventh studio album Different Shades of Blue, released this week, articulates what a singular talent he is. (I wrote a brief review of it here.) Produced by longtime cohort Kevin Shirley, Different Shades of Blue is Bonamassa's first album of entirely original songs since his debut. Until now, his albums have typically been a mixture of original compositions and cover versions.

“I’m not a very confident writer," Bonamassa told me. "I’m not a very prolific writer. But some of the best songs that I have—fortunately and unfortunately—are the ones that I write myself or the ones where I have a good amount of input.”

The singer and guitarist holed up in Nashville with a few writers to work on songs that range from blues shuffles to galloping rockers. By the time he was ready to enter the recording studio in Las Vegas, he had a number of catchy melodies, including "Love Ain't a Love Song" and "Get Back My Tomorrow." 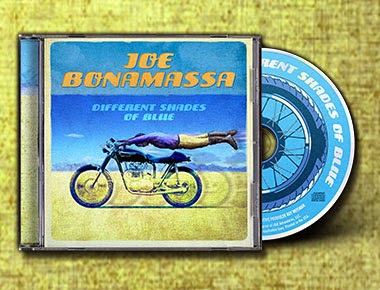 “I kept stockpiling material,” says Bonamassa. “I had some good songs, I had some solid material, but I didn’t have that big stomping, swampy blues thing that I’ve become known for. I wrote this song with my friend James House called ‘Oh Beautiful,’ which was nothing but an a capella verse and then a crazy kind of Led Zeppelin riff. I knew when I came back from that particular writing session on that particular day that we had the record done.”

"Oh Beautiful" is, indeed, the standout track. During the epic solo, Bonamassa’s fingers hurtle down the tracks of the guitar neck like an express locomotive.

Joe is typically modest about Different Shades of Blue. “I listened back to it all the way through and thought, ‘This is not so bad,’” he told me Bonamassa.

Now, if he can only get that British number one...

Posted by Stephen Humphries at 7:08 PM No comments: