Posted by Stephen Humphries at 2:01 PM No comments:

Rumor has it that Paul McCartney was once asked what it's like to be the greatest songwriter in the world. "I don't know," McCartney reputedly responded, "Go ask Neil Finn."

That was the first thing I asked Neil Finn when I interviewed him for the new issue of American Way, the in-flight magazine of American Airlines.

"I've been told that on numerous occasions, but I've never really gotten to the bottom of when and where he said that," Finn told me. "I have a slight reservation—unless you can inform me otherwise—that it's a popular myth. He may not have said that at all. So, go ask Paul McCartney!"

It doesn't really matter what McCartney might or might not have said. Those who know Finn's work as the songwriter behind Crowded House and, before that, Split Enz, can attest to his superior melodic gifts. He and his brother Tim (a founder of Split Enz) have also recorded two albums as The Finn Brothers. Finn side projects includes the The Pajama Club and two albums with The Seven World Collide collective, which includes members of Radiohead and Wilco and artists such as Johnny Marr and KT Tunstall.

Finn has just released his third solo album, Dizzy Heights. It is one of the pinnacles of Finn's remarkable career and shares the rarefied air of previous peaks such as Crowded House's Together Alone and his solo debut Try Whistling This. It's also a new sound for the songwriter. Producer Dave Fridmann (Mogwai, Flaming Lips, Mercury Rev) helped Finn create a sound that's more lush, orchestral and experimental. 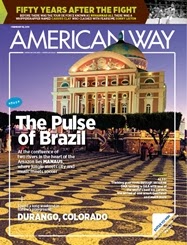 “With this record, I was aware of trying to upset some expectations,” Finn said. “I think that’s a good thing after all these years.”

To achieve that new sound, Finn changed up the way he wrote songs.

“I enjoy the process of editing," he said. "Now that I know how to operate ProTools, I have more of an arsenal at my fingertips. It enables me to come up with an atmosphere and then forming a song around it, so the way songs are forming is often back to front.”

You can read more about the making of Dizzy Heights, which is now in stores, in my interview at American Way. And take a listen to the videos embedded in this blog post for a small taste of the feast of the album itself.

Finn will be touring the album this year (see tour dates here). After that, who knows? He's recently been writing new songs with his brother Tim. And Crowded House will return to action at some point, too.

“We did start some recording on the Crowded House front and I think there are some strong things in the cupboard that will see the light of day at some point," Finn said. "But I just started these other songs and they seemed more urgent to me and not necessarily suited to Crowded House. The decision of what to call things or what entity to use is slightly confusing to people - even for me, it’s confusing – because there’s some history attached to each entity. But, to some extent, I try not to think about it too much."

Indeed, it's best to regard Finn's work as a continuous whole, regardless of the name of the project. He's one of the best songwriters out there, as Paul McCartney would surely attest.


Posted by Stephen Humphries at 6:00 PM No comments:

During the 1960s, Laurel Canyon developed a reputation as an enclave for folk and rock musicians seeking quiet sanctuary from the hustle bustle of Los Angeles. But on the drive up to the studio of Bigelf, a single neon-lit peace sign on the roadside was the sole reminder of a time when Laurel Canyon was more hippie than yuppie. The band, a trio that has been recording its distinctive psychedelic-pop prog, has long been based here.

"When we recording Money Machine and the demos for Hex, we lived across the street from from the garage where The Who used to rehearse in the '60s," bandleader Damon Fox told me. "Laurel Canyon has a vibe and, if that energy is inside you, then you channel it."

On assignment for Prog magazine, I interviewed the band about Into the Maelstrom, its long-awaited followup to its last album, 2008's Cheating the Gallows. During the interim, Bigelf underwent significant lineup changes. "For Bigelf to survive, it had to be torn apart and put back together," Fox said. Indeed, the band has endured more setbacks and struggles than most bands, which I chronicled in my article. As they put it, "Our Behind the Music special would be pretty devastating."

The resulting album is a triumph. Bigelf recruited drummer Mike Portnoy to guest on drums and recorded its best produced and most forward-looking album to date. Seek it out when its released March 3 on InsideOut. And, in the meantime, read the latest issue of Prog, currently filtering onto newsstands (including Barnes & Noble in the US) and available as an e-magazine via iTunes and Google Play.

Posted by Stephen Humphries at 4:50 PM No comments: