My interview with Kristen Bell 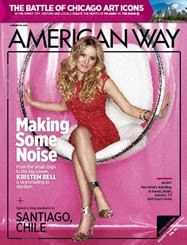 I interviewed Kristen Bell for the cover of the current issue of American Way, the in-flight magazine of American Airlines. (Here's a link to the online version. Note that the story ends of page 7 but there's also a sidebar on page 8.)

It was a nerve-wrecking assignment. The publicist only gave me 60 minutes to interview Kristen. I was told that the interview would take place entirely in her trailer. After that I was to leave the set of her television show House of Lies. I was nervous that I wouldn't get enough interview material for the in-depth piece, let alone any color for it.

That was before I met Kristen. She was so welcoming and warm. She gave me 75 minutes, shooing away people who wanted to curtail our time. And then she spontaneously asked if I'd like to just hang out on the set for the rest of the day. I got to watch her film a scene which gave me a great lede for the story. She spent the entire time with me when she wasn't filming. By then, we were well past the actual interview and just chatted for hours and hours about everything from her trip to South Africa to Breaking Bad to life with her new baby - who is incredibly cute. (Kristen is protecting her daughter from public view, but she was happy to show photos to everyone on set.)

She's a blast to hang out with - as genuinely lovely as you hope and nothing fake about her either.

And the Veronica Mars movie sounds very promising.  I asked Kristen about how, on the one hand, the movie has to cater to the hard-core fans of the TV show and, on the other hand, it has to stand on its own for people who have never seen it. How on earth did creator and writer Rob Thomas approach that task?

He does it brilliantly, as he does everything. But if I had to choose who he’s writing for more, without question it’s for the long-term fans. He has chosen to disregard exposition that may or may not be necessary for new viewers because we didn’t make this movie for new viewers. We feel that people will want to watch it, knowing nothing about the show, and it’s important that we keep that in mind. But ultimately, the people we are working for are the people who funded it – our long-term fans. Everyone else is irrelevant. Even the studio is irrelevant, to be honest with you, because Rob raised the money through Kickstarter, he was able to do what he wanted. He had complete creative control. Rob is a very unselfish writer because he doesn’t write what he wants. He writes what he know will light a fire under the fans. He writes what you want to see. I think that’s what makes him such a good writer.
=======================

Can't wait for the release of the Veronica Mars movie on March 14!
Posted by Stephen Humphries at 7:57 PM No comments: