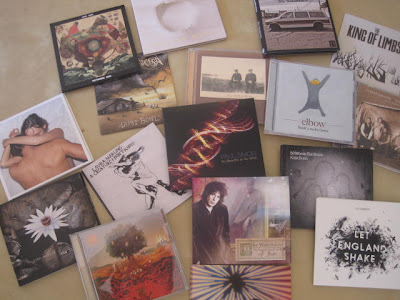 Here's a paradox for you: The better an album is, the less I listen to it. In making a list of my favorite albums of 2011, I can easily identify the best records of the year by the one's I've listened to the least. They're the albums I most want to savor and so, to make each listen a special experience, I ration how often I listen rather than overdose on them. That's certainly true of my top 10 fave albums of the year, which I've listed below. (Only studio albums released in 2011 qualify for the list which is why great live albums such as Jeff Beck's Rock 'n' Roll Party and Gary Moore's Live at Montreux 2010 didn't make the cut.)

In compiling my wholly subjective list, I must stress that only the top 20 or so albums fit roughly into an order of preference. After that, the rest of the list is haphazardly arranged. After all, it's difficult to truly scale an order of ranking between albums of such disparate genres. Indeed, my list spans genres including indie rock, blues, world music, electronica, progressive rock, metal, folk, and Americana.

I'm sure my list of fave albums has gaps in it. because there are doubtless many great albums that I haven't heard. That's not for lack of trying. I'm constantly seeking out new music by listening to albums sent by publicists, reading music reviews by great music journalists—some of whom I am proud to call my friends—such as The Guardian's Alexis Petridis (@alexispetridis), The Chicago Tribune's Greg Kot (@gregkot), Rolling Stone's Simon Vozick-Levinson (@simonwilliam), Under the Radar's Laura Studarus (@laura_studarus), Laura Ferreiro (@Lauralista), The Wall Street Journal's Jim Fusilli (@wsjrock) and Innerviews' Anil Prasad (@innerviews). I also rely on the great counsel of my old friend and music guru, Simon Gort. (Follow Simon on Twitter at @sgort100.)

For Christmas, my friend Simon gave me Amplifier's rock epic The Octopus and it is a late entry into my list. He also sent me Apparat's The Devil's Walk after I expressed how much I loved a track on it called "Escape." I haven't had time to listen to it, yet, so it's not in my top 50 list. There are many albums released this year that I've only heard parts of, or given a cursory listen on Spotify, and wish I could delve into further, including:

So much great music, so little time.

Though he is best known as the leader of the British band Porcupine Tree, Steven Wilson’s extracurricular activities include the art-rock group No-Man, the pop-rock band Blackfield, the Krautrock of I.E.M., and the minimalist drone electronica of Bass Communion. On his second solo record, the prolific polymath combines his disparate music personalities to forge a sound uniquely his own. Over the course of the double album, Wilson draws on textural electronica, piano balladry, trip-hop, soundtrack-like soundscapes, doom rock, and eastern-tonality jazz to create eargasmic melodies. The subject matter of the songs ranges from the gravitational collapse of a relationship ("No Part of Me"), to the onset of paranoid depression ("Remainder the Black Dog"), to the story of a home invasion that doesn't end well for a family ("Raider II"). In short, it's an album so dark and ambitious it would give Trent Reznor whiplash. On Grace for Drowning, Wilson reaches musical and emotional planes most artists don't know exist.

A few other thoughts and observations about the year in music...

It started horribly. On February 6, my all-time favorite guitarist Gary Moore died of natural causes in his sleep at the age of 58. I've expressed what a terrible loss this premature death was to the music world elsewhere in my blog. I don't anticipate too many posthumous Gary Moore releases from here on other than the re-releases of several old concert videos on DVD and Blu-Ray. Though Gary was working on a new blues album at the time of his death, he had only created a few demos. A concurrent project he was also demoing was a return to the celtic-rock style he first played on Thin Lizzy's Black Rose (which was re-released this year with a bonus disc of unheard material) and mastered on great albums such as 1987's Wild Frontier and 1989's After the War. Half a year before his passing, Gary played a European tour of music from those albums and the set included three new songs. Fortunately, an album and DVD of the tour, Live at Montreux 2010, captured those superb new songs for posterity and left us with a fitting reminder of Moore's unparalleled diversity of musical styles and his peerless emotional guitar playing.

This past year, I found myself craving more roots and boogie music. I've been feeding this musical side of me by listening to the likes of Little Feat, Taj Mahal, John Hammond Jr., and Jimmie Vaughan. I've been getting my fill of that sort of music every week by my favorite DJ, Chris "Rock Professor" Prior in South Africa. Download the podcast of his weekly radio show at: http://krips48.podomatic.com/

In all, a good year for music for my ears. I hope it's been a good music year for you, too.

Posted by Stephen Humphries at 4:15 AM No comments:


Albums currently in rotation:
If you're wondering why I'm only posting November's playlist now that it's over half way through December, it's because I spent most of that month working on my novel. I finished the first draft of the novel just a few days ago. Months of hard work but I'm thrilled with how it's turning out. More details in the months to come as I work on the edit/rewrite. Given the intensity of the writing process, November's playlist was slim. (I wish I could write and listen to music at the same time but I often find I need all my faculties attuned to listening to the ideas for the page.) However, November produced one of my favorite albums of the year: Kate Bush's 50 Words for Snow

At the start of 2011, absolutely no one would have predicted that Kate Bush would release not one, but two, albums in a year. This reclusive artist last emerged with an album in 2005 with Aerial. Before that, her previous album was released in 1993. (To get my extensive thoughts on Kate's first release of 2011, Director's Cut, an album in which Kate reworked some of her older songs, scroll further down to my June playlist.) Half a year later, we've been spoiled with her first new album of brand new material, 50 Words for Snow.

50 Words for Snow is an enthralling work. Much has been made of the fact that this new album is a concept record about winter and snow. But there's also another common denominator that links the songs (the shortest of which is 7 minutes long): They're all about loss and people (and, er, a Yeti) desperately trying to make a connection with each other.
————

The trio's debut album is not for the faint of ear. This wholly unusual instrumental record is often brutal, noisy, and abrasive. It's also shot through with moments of sublime beauty and harmony.

The album's unusual textures stem from the inside-out guitarwork of David Torn. A recording artist for both ECM and Windham Hill labels, Torn is very much an art rock guitarist who has recorded with the likes of Tori Amos, David Sylvian, Mick Karn, and David Bowie. Torn is very much a guitarist more interested in spacial textures than playing straightforward scales. On Levin Torn White, the guitarist can sound his instrument like a dentist's drill, a hornet's nest, and an electrical grid about to go on the fritz. He can also produce spectral beauty from his guitar on tracks such as "Convergence."

If you're fond of the more outré adventures of King Crimson and Robert Fripp, this album is for you. It's uneasy listening. But if you're feeling bold, take a trip into this 4th dimension of sound.

I'd heard of Matt Stevens long before I heard him. The guitarist is closely aligned with Britain's modern progressive rock movement though I must say that his music sounds less prog than it does progressive. (That's a compliment by the way.) Stevens' specialty is acoustic guitar, an often underutilized lead instrument in progressive music nowadays. The acoustic guitar is the lead instrument on Stevens' latest record, Relic, which consists of 10 delightful instrumentals. That's not to say that it's an acoustic record. Bass, electric guitar, and drums are consistent ingredients throughout but, more often than not, it's acoustic guitar that's to the fore.

On tracks such as "Rushden Fair" and "Sand (Part 2)," Stevens creates delicate lattices of harmonic interplay with his finger-picked guitar. Elsewhere, the arrangements and riffs of "Nightbus," "20 GOTO 10," and the title track pack a crunch that will appeal to fans of The Pineapple Thief and Radiohead. On "Frost," Stevens demonstrates that he's no slouch on the electric guitar either as he grinds out a gnarly riff and tears through lead lines so quickly that one imagines smoke coming off the strings. "The End" evokes a feel similar to Fleetwood Mac's "Albatross" without sounding like it.

My favorite track on Relic is titled "Scapegoat." Listen to it below and you'll see why! Then go get the album, which you can also stream, over at www.mattstevensguitar.com/

Posted by Stephen Humphries at 4:39 PM No comments: