Songs from most of these albums (and other imminent albums that have yet to be released) can be heard in my new wide-ranging and eclectic Spotify playlist: Best new songs of June:

Posted by Stephen Humphries at 3:21 PM No comments: 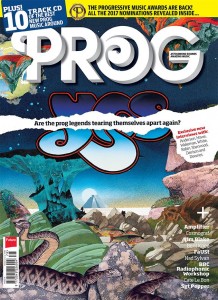 The new issue of Prog magazine hits newsstands in the UK today and will soon make its way to US newsstands such as your local Barnes & Noble. Better yet, try a monthly subscription at $4.99 to the online version at teamrock.com to access the magazine as well as other Team Rock magazines (and archives) such as Classic Rock, Metal Hammer and Blues.

In addition to stories about YES and Amplifier—I adore both bands and own their entire catalogs—the issue also includes a lengthy feature I wrote about Bent Knee.

Bent Knee, a six piece that formed at the Berklee School of Music, has developed a sizable following for music that they describe as existing in the "nooks and crannies just outside the mainstream."

What I love about Bent Knee, whose influences span from Sufjan Stevens to Kendrick Lamar, is that they don't sound like anyone else. That includes powerhouse singer Courtney Swain. These mid-twenties musicians don't sound derivative. A Wall Street Journal feature on the band praised their silo-smashing sound which "taps into cabaret, ’70s piano-based folk, chamber pop, industrial rock, metal and prog rock—with the snap of funk and hip-hop in some of its rhythms."

They've just signed to a Sony label and their album Land Animal is released now out. (Hear it now on Spotify or, better yet, order a physical copy.) It's excellent and should be a breakthrough for them—check out songs such as "Insides In," "These Hands," "Time Deer" and "Boxes." The hard-working band's burgeoning success is well-deserved as they're such lovely people.

Bent Knee already have a good-sized fanbase thanks to constant touring across the US. The song "Terror Bird" from the album, below, will give you an inkling of how good they are in concert. Catch them on a US tour in July and August. Dates below and more details at www.bentkneemusic.com:

Posted by Stephen Humphries at 11:45 AM No comments: