Posted by Stephen Humphries at 1:30 PM No comments: 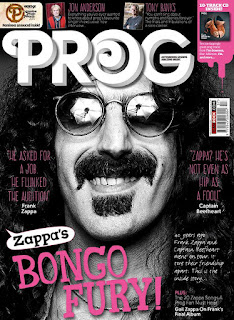 My most exciting musical discovery of late is a purely independent artist named Rian Adkinson, who is based in Georgia. I hadn't heard of him until Prog magazine just asked me to interview him for its latest issue. Rian is primarily influenced by Steven Wilson, Marillion, The Pineapple Thief, Genesis, Yes, Rush, Talk Talk, etc., but his album isn't overtly prog.
Highly recommend you go to iTunes and just buy Rian's album, Villain, which is fantastic from start to finish. You can stream the album on his website here. For starters, listen to the songs "I'll Be the Lightning" and "Les Revenants"—in a perfect world, those two songs would be megahits. The whole album is brimming with great pop-rock melodies.

Also in the latest issue, I wrote a short news piece about Francis Dunnery's upcoming studio album, Vampires. Intriguingly, the great songwriter, guitarist and singer has elected to re-record 14 tracks from his first band It Bites. (If you only know It Bites for the band's top 10 hit single "Calling all the Heroes" in 1986, dig deeper - that song is about as representative of the band as  "Hi Ho Silver Lining" is of Jeff Beck's ouevre.) Dunnery's looking to record some of that pop-prog band's best songs in a more organic style that won't sound as dated.

Read about that and more in the new issue of Prog, available at Barnes & Nobles, good newsstands, and also available digitally. Find out more at: https://prog.teamrock.com

Posted by Stephen Humphries at 10:42 PM No comments:

My Book in Billboard Magazine

Billboard magazine has a piece about the book that I wrote for Hugh Syme and Rush about their 40 years of collaborations on album covers.

Veteran rock journalist Gary Graff interviewed Hugh about The Art of Rush (now available via Rush.com or on the merch stand of the band's R40 tour) as well as his predictions about the band's future. As a bonus, the Billboard piece also includes Rush drummer Neil Peart's foreword to the book.

It was an honor to be asked by Hugh to write this book and a joy to work with him (and Neil, Alex, and Geddy) on the 272-page tome, an opportunity for Hugh's artwork to enjoy the limelight it so richly deserves.

Posted by Stephen Humphries at 6:26 PM No comments:

I recently interviewed Joy Williams (formerly of The Civil Wars) for Under the Radar magazine. It was a very intimate conversation in which we she described how the death of her father, her crumbling marriage, and the demise of The Civil Wars transformed her as an artist. The singer calls her new album, Venus, a "coming of age" album. Follow this link to read my in-depth profile interview with Joy.

The video below is one of my favorite songs on Venus, a very good album.

Posted by Stephen Humphries at 11:25 PM No comments: