Posted by Stephen Humphries at 2:29 PM No comments:

My Interview With Emily Blunt 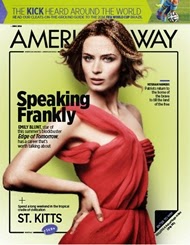 When Emily Blunt entered a small French café in West Hollywood to meet for our interview for American Way, no one seemed to recognize her. Maybe it’s because the café patrons were already distracted by Dexter actress Jennifer Carpenter, who was sitting in a corner. It could be that filmgoers are so accustomed to Blunt as a brunette that they failed to recognize the Golden Retriever blonde in sunglasses. Or perhaps it’s because the actress was heavily pregnant, her belly orbited by a silk scarf. Two and a half weeks after the interview, Emily and her husband John Krasinski had a baby daughter named Hazel.

I'd half expected a trail of paparazzi in the actress's wake. Prior to the interview, I'd been following Emily's activities on Google—she was a daily fixture in the tabloids.

“They just want my water to break in front of them,” Emily told me. “It’s the most exposed I’ve felt when I have my picture taken. So I feel more protective. They all want to sort of see how big the bump’s getting and predict when the baby’s coming. It’s a bit of a frenzy.”

I asked her if she'd ever considered getting a bodyguard.

"It’s not that bad compared to some people. I can always wade my way through them," she said, laughing. "I’ve never felt the need to have that."

On the day of our interview, Emily managed to briefly elude her professional stalkers and we enjoyed a lengthy breakfast together. She's genuinely lovely. A great sense of humor and she laughs a lot. Also: entrancingly beautiful. If Hollywood was to cast the part of Helen of Troy, "the face that launched a thousand ships," she'd be first on the list.

Here's a few excerpts from the interview that didn't make it into the article for American Way, the in-flight magazine of American Airlines, which you can read here. The story, which will be in seatbacks throughout June, is timed to the release of Edge of Tomorrow, her sci-fi movie with Tom Cruise.

What inspired you to take on the role?

The two things that drew me to it were Doug Liman and Tom Cruise. I love Doug’s movies. He always manages to carve out new space for himself within a genre. He puts his stamp on it. You know that’s a Doug Liman movie. Tonally, he has something that’s quite fresh and humorous. I love it when sci-fi movies aren’t earnest. I want to shoot myself when they’re too earnest or sentimental or dramatic. I think what Doug manages to do is to create a story where the stakes are very high and he plays stuff very much for real. But you find within it that there are moments where it’s very humorous and you can relate to these characters when you can envision yourself in their shoes.

Tom Cruise probably did all his own stunts. How many did you do?

We both did stunts. I thought, ‘Well, if he’s doing them, I have to do them. I don’t want to wuss out.’
I actually had an Asian mad doubling me for some of the massive hits. Because the suit was so heavy, they needed a guy to carry it.

What was worse to wear – the corsets and crown in Young Victoria or the exo-skeleton in Edge of Tomorrow?

I spent days on set praying to be in the corset. That’s how heavy it was. But it was so heavy, you kind of get used to it. It’s something you endure, initially, and then you have to embrace it otherwise you’ll just cry.

After Gideon’s Daughter, you broke into Hollywood very quickly – you had to fight to get the part in Devil Wears Prada – tell me about that.

If Revenge Wears Prada, the book sequel, gets made into a movie, are you game to do it?

I think we’d only do it if all of us did it. I spoke to Meryl about it when we were doing Into the Woods and she was like, ‘I don’t want to lose the weight.’ I’m very cautious about sequels. The film was so good and worked so well that it could take something away from the original by trying to replicate it.

Lightning round: Give me a few sentences on your memories and enduring impressions of working on the following movies:


Dancing with Steve Carell. And it was awesome. I like to dance. It was a scene where we dance stupidly in a bar. It was hilarious.


Just a stupid laugh, the whole thing. Jason Segel is a good friend of mine and it was a film that was exciting and kept you on your toes because we improved so much and it’s always exhilarating working like that.


[Laughs] Cripplingly embarrassing. Crawling all over Tom Hanks in my underwear. He was such a gent. I don’t think he’d ever done that kind of role. He doesn’t play those kinds of characters. So we laughed about that. I remember I had the flu as well doing that scene, so I’m sure I infected him with all kinds of horrific germs during the process. I remember feeling like crap that day.


I met my friend Amy [Adams] on that. Albuquerque, New Mexico, was not my favorite place to shoot. Everything’s beige. But we had a laugh.


That was the most awesome experience. [Director] Rian Johnson is a gem. He’s spooky good. That was three and a half weeks and it was one of the most rewarding, if not the most, rewarding experiences I’ve had on a film set. He has an extraordinary vision that he communicates to you with the utmost clarity. The dialogue is completely rare and not like anything else out there. So you’re blessed with these lines that you think you’ll never get a chance to say again. Shooting with the little kid was so magical. He was amazing. I remember we auditioned three boys and I flew down to read with a few of them. They narrowed it down to three. Pierce was the youngest. He was barely six. He’d just turned six. It was like the atmosphere froze in the room.


Matt Damon in a Fedora, which made me laugh every day. We did really hit it off and he’s now one of my dearest friends.

On YouTube, there's a video of the scene in The Adjustment Bureau where you and Matt Damon meet for the first time in a men's bathroom. That video has a one-word description: Chemistry.

We not only hit it off as friends, but I think we found a rhythm as characters that really worked for that scene. We riffed around the dialogue and improved some stuff. So the scene felt quite spontaneous and fresh. George Nolfi let us play around with the scene a bit, which was nice. I think we really needed that scene to work, otherwise the movie doesn’t work.

Would you ever go back to doing TV?

Oh my God, yes! Yes, please! Please. It would be amazing. One hundred percent. We all want to. You speak to a lot of actors, they all want to. I love what HBO are doing. Have you seen True Detective? I really want to see it. Breaking Bad is so good, but I haven’t finished it yet, so don’t tell me.

What’s the last time you can remember laughing hard?
Last night. Something John was doing. No one makes me laugh more. To the point where I think I’m going to give birth. And I just said, ‘You have to stop. You have to stop now, my water’s going to break.’

You’re at a momentous stage in your life – your life is about to change profoundly. Has it sunk it at all? Do you feel ready?

I know. It feels as if something magical is about to happen. John said this the other day: It’s like somebody is taking your hand and saying, ‘You’re going to meet your husband tomorrow. And then looking you dead in the eye and you know it to be true. And then it’s a combination of that and also somebody saying to you, ‘You’re going to football practice tomorrow and you’re going to get the stuffing knocked out of you. But you have to go.’ [Laughs.]

So, it’s like the combination of the most glorious experience of meeting this person that’s going to change my life and also not knowing what to expect from the birth. Everyone has their story and I’ve heard some horror stories and some lovely stories. Everyone wants to overshare. And now I’ve actually stopped listening to any of it because everyone wants to give you their advice and wants to give you their story. I think that mine is going to be mine. It’s different for everyone.

What do you still wish to accomplish in your career?

There as some directors that I’d like to breathe the same air as them. I loved Wolf of Wall Street so much. I thought it was filthy brilliant. It could have gone on for another three hours and I wouldn’t have cared. Leonardo was my favorite performance of the year. It was extraordinarily raw and his ability to be that ugly. It took my breath away. I felt pinned to the couch. I’d love to work with Scorsese.
I love David Fincher. He likes people to feel uncomfortable. That’s what I like. He’s not an obsequious director. He likes people to feel rocked and very uncomfortable. I like that he doesn’t cater to the audience, because so many films cater to what they think people want to see or what they think people want to feel. That’s why I like movies like Wolf of Wall Street, which is just a spectacle of filth. I want the shock factor.

You once said that you don’t wish to be defined by the job you do – how do demarcate that part of your life so that it’s not all-consuming?
I think it’s quite easy. You just walk through the front door of your house. When you walk into your house, it’s a different world and when you walk outside, it’s another world sometimes. Don’t do too many movies. [Laughs]

Posted by Stephen Humphries at 1:26 AM No comments:

May 29, 2014 By Stephen Humphries
“Charge,” the first song of Elbow’s concert, is aptly titled. The British band storms the audience with startling vigor, urged on by Richard Jupp kicking his bass drum with the force of a Clydesdale. Midway through the new track, a pair of female violinists seated at the rear of the stage swoop in. Their dramatic musical squall increases the barometric pressure inside the room. The audience somehow finds its breath for a loud cheer.
Read the full review at Under the Radar magazine's site...
Posted by Stephen Humphries at 11:30 PM No comments:

Email ThisBlogThis!Share to TwitterShare to FacebookShare to Pinterest
Labels: Elbow, Guy Garvey, The Take Off and Landing of Everything; Under the Radar magazine
Newer Posts Older Posts Home
Subscribe to: Posts (Atom)