Posted by Stephen Humphries at 12:56 PM No comments: 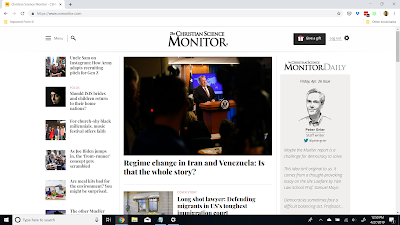 In some personal news, I have just been hired as Chief Culture Writer at The Christian Science Monitor. (I didn't choose the grandiose job title!)

The newspaper, a pioneering bastion of journalism, was founded by Mary Baker Eddy in 1908. It was as an alternative to the pervasive "yellow journalism" of the day. As the newspaper's masthead proclaims, "To injure no man, but to bless all mankind."  It has won multiple Pulitzer Prizes and renown for its non-sensationalistic, fair, truth-seeking approach. Fundamental journalistic principles that, at the time of its arrival, seemed novel! Perhaps it shouldn't be called a newspaper anymore given that The Christian Science Monitor ceased printing a daily newspaper over a decade ago and moved online. These days it's a daily digital publication but we also produce also a weekly print magazine.

Poke around the website or, better yet, subscribe. It's a publication for thinkers. A focus on stepping back from the news to focus on big ideas underlying the news—a look at trends, understanding others, prevalent modes of thought, and identifying progress in the world (as well as pointing areas that require attention and help). The Christian Science Monitor is also renowned for its truly global focus with international bureaus across the world.

I previously worked at the newspaper from 1999-2009 where I conceived and edited the Weekend Section. I was also a writer at the Los Angeles bureau prior to leaving for a freelance career. I'm thrilled to return to the newspaper. Here's a few articles I've written since my return. (Note, the newspaper allows non-subscribers to read five free articles a month.)


Is the music industry finally facing its #MeToo moment?

Apple joins the streaming menu, but are viewers already full?

Holy Grail: How can Hollywood get religious movies right?


Posted by Stephen Humphries at 12:53 PM No comments: