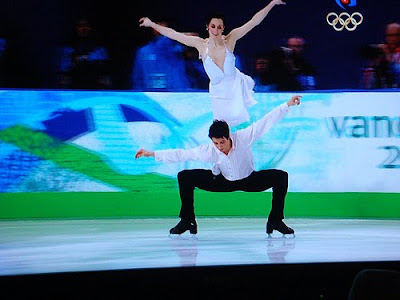 The best male and female screen performance of the past 12 months? Sorry, Meryl and Jeff, it's neither of you. The winners in this category are easily Tessa Virtue and Scott Moir, the Canadian skating pair who won gold medals last night in Ice Dancing at the Olympics. For good measure, they ought to take home little gold statuettes as a bonus.

I'll return to the duo's remarkable thespian abilities in a bit. But first let's recap just how many great performances (of the non-acting kind) we've already seen at the Vancouver games.
If I seem overly US-centric in my list of highlights, forgive me. It's NBC's fault. The coverage is heavily skewed toward American competitors. Anchor Bob Costas shows off a chart of the medal count so regularly that you'd think we still lived in the mercantile era rather than one of globalization. Props to Steven Colbert for pin-pricking the balloon of jingoism with his "Defeat the World" mantra. 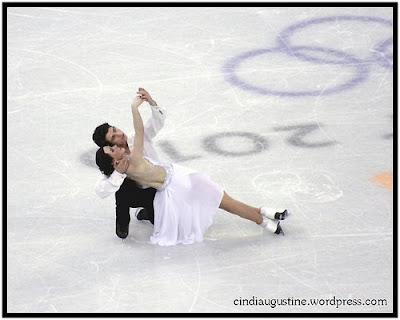 Which brings us back to the Canadian skaters, Virtue and Moir. As brilliant sports writer Mark Sappenfield observes in The Christian Science Monitor, their routine was so winning that, "For a night, it seemed, the 48th parallel disappeared and we were not two brotherly nations, but brothers." (If you missed the duo's events over the past three nights, watch them here and here.)

Indeed, their performances over the past three nights were transcendent. Not just because of their inspired choreography, perfect synchronicity, surprise moves, and agile athletic ability. The duo's second dance was distinguished by a red-hot passion that threatened to turn the icy stage beneath their skates to slush. It was there in the deeply affectionate glances between the two as they held hands during a turn around the arena prior to the most important skate of their lives. And it was there in the tender embrace concluded their elegant routine, a ballet on ice in which the swan-like skaters seemed to fall in love while millions watched. The duo could have performed in an arena filled with fans of UFC extreme cage fighting and there wouldn't have been a dry eye in the audience.

Which is why it was heartbreaking to discover that Scott Moir and Tessa Virtue (who resembles a young Kate Beckinsale) aren't romantically involved. Theirs is not a tale of love off the ice, like Torvill & Dean, Jamie Salé and David Pelletier, or even Moira Kelly and that hockey player in "The Cutting Edge." They’re just great friends. Indeed, Moir is dating another prominent skater. All of which underscores how powerful the duo’s performance was. Like actors in a great romance movie, they made us believe in a great love story. In the process, they created the single defining moment of these games.
Posted by Stephen Humphries at 8:31 PM No comments:

How the Oscars got boring


Just about every year, weary journalists and pop-culture pundits trot out opinions on how to save The Academy Awards because the Oscars no longer draw big viewership figures. In 1970, the televised ceremony had a 43.4% share in the ratings. Today, it's less of an event. Last year's show -- which was up 6% on 2008 -- boasted an "American Idol"-scale audience. Which is pretty good, but hardly phenomenal in this era of long-tail media fragmentation.

Typically, suggestions on boosting numbers tend to go like this:
Such cosmetic changes will move the needle some. But our culture has fundamentally changed since Oscar's heyday. For starters, Hollywood movie stars aren't as important anymore. In part, it's because there's less mystery and less golden-era glamor.

There was a time, long ago, when stars weren't over-exposed. Apart from the occasional appearance on Johnny Carson or a Jerry Lewis telethon, your only opportunity of seeing actors outside of the movies was tuning into the Oscars. Nowadays, you can watch Clooney picking his nose on TMZ. In the old days celebrities were largely presented in publicist-controlled puff pieces in "Life" magazine. Now, you can read about Brangelina's sex life in US Weekly right after you've flipped past pictures of J.Lo pumping gas in the "Stars: They're Just Like Us!" feature.

More fundamentally, stars no longer have the currency they once did. Studios now rely on well-branded properties and high-concept stories, rather than big-name actors, to pack theaters. That's true of nearly all 2009's top-grossing films: "Avatar," "Star Trek," "Transformers," "Harry Potter," "Twilight," "Alvin & The Chipmunks," "The Hangover," "X-Men: Origins," "2012."

There are one or two exceptions to that hardening rule: Robert Downey Jr. helped sell the "Sherlock Holmes" brand name with the capital he gained from starring in "Iron Man 2." Sandra Bullock and Meryl Streep can reliably draw a crowd in the right project. And Will Smith could probably star in a sequel to "Howard the Duck" and still notch a big opening weekend. But can they turn the awards telecast into a "must see"? Nah.

So, if celebrity is no longer a significant draw for the Academy Awards, how about the movies? The gambit of expanding the Best Picture nominees to 10 films will likely improve audience numbers as the category isn't just limited to middlebrow fare. The 9 nominations for "Avatar" will be a cause for celebration for the Academy and ABC because the last time America gave a damn about the Oscars was the year of "Titanic." The studios will cheer, too, since the awards are primarily about selling movies (and flattering egos).

Problem is, the Academy awards are all over before they've even begun. The awards season is oversaturated with award shows, many of them televized, ranging from The Golden Globes to the Spirit Awards. Moreover, each of Hollywood's major guilds -- Actors, Producers, Directors -- hold their own ceremonies and the big winners in each category tend to be a safe prediction of who will win in the corresponding Oscar category. We now know that Jeff Bridges will win for Best Actor, Sandra Bullock for Best Actress, Kathryn Bigelow for Best Director, and The Hurt Locker for Best Picture.

All of this happens before the Academy Award nominations have even been announced. In fact, the only surprises today in the widely predicted nominees was the inclusion of "The Blind Side" for Best Picture and "In the Loop" for Best Adapted Screenplay.

Simply, there's no element of suspense anymore.
Posted by Stephen Humphries at 1:55 PM No comments:

A few thoughts on the Grammys 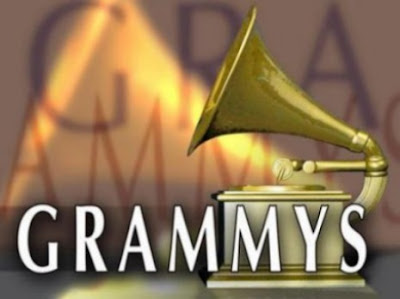 Last night, Taylor Swift's narrow-slitted eyelids popped into Katy Perry-like wide-eyed surprise. Her numerous wins, including the top prize of Album of the Year, left me googly-eyed, too. Swift's off-key warbling during a duet with Stevie Nicks woulda got her kicked off "American Idol" in round one. At that moment, I blessed the inventor of the mute button.

Other performers opted for autotune, though worst offenders Jamie Foxx/T.Pain/Slash still managed to sound outtatune during their messy medley.

That unwieldy collaboration typified the Grammy approach: Cram as many star names onto a stage at once. As usual, the Grammys were all about selling product first and foremost. As Jon Pareles of the New York Times noted,

"The Grammys have found the right balance of performance and award — which is to say, the awards are strictly a sideshow. A recording business desperate for sales wants to expose as many items as possible, and most performers were introduced along with their song titles in case anybody wanted to download them immediately. Medleys were the rule, squeezing in more songs per minute, and as usual the Grammys featured generation-crossing duets."

Most bizarrely, Andrea Bocelli and Mary J. Blige shuffled around a duet of "What Child Is This?" It's the worst idea for a collaboration since McCain/Palin. When Eminem, Lil' Wayne and Drake appeared on stage, it seemed like the most exciting showdown since the gunfight at the O.K. Corral. It was hard to tell since CBS's censors used the mute button for large portions of the song (if only they'd done that for Taylor Swift). The Eminem, Lil' Wayne, Drake performance should have included mash-up of "Pants on the Ground." Someone please buy Lil' Wayne a belt.

Lady Gaga, meanwhile, achieved the impossible: She was more flamboyant than even Elton John during their medley of "Speechless/Your Song." Gaga was the easy winner in the most interesting race of the night: most bizarre dress. Other nominees included Imogen Heap, Pink, Katy Perry. Gaga seems to have stuck to her New Year's Resolution to dress less conservatively this year. (Ok, I made that up.) But at this point, the only way she can top herself is to arrive at an awards ceremony on a pair of stilts while wearing Big Bird's costume. At any rate, she'll never top last week's weirder than weird awards outfit worn by the infinitely more talented Fever Ray. The ever-kooky Imogen Heap, whose excellent "Ellipse" deserved more than just a win for "Best Engineer," wore a tech thingy that transmitted live photos taken by fans.

Of all the performances last night, my favorite was watching Jeff Beck playing a Les Paul (the guitarist has barely touched anything other than a Strat since the early 1970s) during a tribute to the instrument's creator. His solos during "How High the Moon" were elegant and gorgeous.

I was also surprised how much I enjoyed the Usher/Carrie Underwood/Jennifer Hudson/Celine Dion take on Michael Jackson's "Earth Song." Collectively, they deployed more melisma than an entire season of "American Idol," but it worked great and reminded one how good Jackson's pop can be.

Beyoncé, too, showed off her range. The golden goddess's medley was pure Sasha Fierce -- particularly as she channeled angry Alanis for the "You Oughta Know" segment -- with almost as much crotch crabbing as Eminem. Bizarrely, and for no apparent reason, she was surrounded by a phalanx of men dressed like a SWAT team. The only other time you'll see that many paramilitary troopers on TV is when Hugo Chavez clamps down on a protest rally on CNN. Or an in-store signing session by Justin Bieber. In a rare television appearance (cough), The Black Eyed Peas tried to outdo Beyoncé by dressing Fergie like "Tron" and surrounding themselves with a troupe of dancing robots.

Like so much of the mainstream pop on display last night, the Black Eyed Peas offered up '80s-influenced soulless plastic dressed up in substance-less style. The worst offender yet, Ke$ha's "Tik Tok," mercifully wasn't released in time for a nomination this round. But it'll no doubt be in contention for Record of the Year in 2011.

I'll have the mute button at the ready.
Posted by Stephen Humphries at 2:21 PM No comments: