Posted by Stephen Humphries at 9:52 PM No comments: 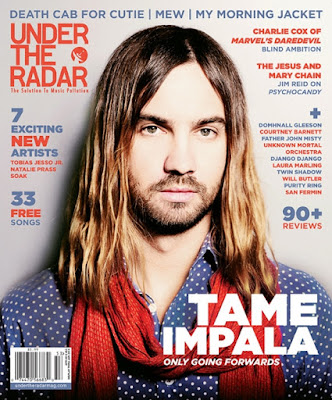 I recently interviewed Laura Marling for the new issue of Under the Radar magazine, now available at your local Barnes & Noble, newsstand, and also as a digital download via iTunes and Zinio. (The magazine includes a tremendous cover story interview with Kevin Parker of Tame Impala.)

I've been a fan of Marling ever since the release of her magnificent second album, I Speak Because I Can (2010). The lead single, "Devil's Spoke," signaled that the young British songwriter wasn't a genteel folk artist. She percolated her acoustic-based songs through brooding atmospheric textures and her vocal delivery had an edge to it. The follow-up single "Rambling Man" showcased lovely harmonies and a dynamic arrangement.

The Elfin musician was all of 20 years old at the time. As many, many, many writers chimed in unison, her sophisticated lyrics suggested she was wise beyond her years.

Marling's third album, A Creature I Don't Know, was even better and included the lovely single "Sophia." But it was Marling's 2013 album, Once I was an Eagle, that found her testing the boundaries. Holed up in a studio with longtime producer Ethan Johns (son of legendary producer and engineer Glyn Johns), she created a song cycle of often-interlinked songs that sounded like an emotional exorcism. In retrospect, though, the album was perhaps too dense, too long, but it has some great moments including the unusual but catchy"Master Hunter."

The subject of my phone interview with Marling was her latest acclaimed album, Short Movie. She produced it herself and also played electric guitar for the first time on record. It features some of my favorite Marling songs to date, such as "False Hope" and "I Feel Your Love."

Prior to the interview, I wondered whether Marling would be shy and less-than-forthcoming, In concert, she tends to gaze upward rather than make eye contact with the audience. But she was friendly and open during our half-hour call. She has one of those speaking voices one could listen to all day. (She could pursue a sideline career in narrating audiobooks.) Among other topics, we chatted about how a night in a backwoods "axe-murderer town" inspired the title track of her new album, why she shelved an entire recorded album and started over, and how guitar practice equipped her to cover this Led Zeppelin classic.

You can read the main interview in the magazine. But I wrote a second piece from leftover quotes for the magazine's website.

Seek out Marling's tour of the US this summer.
Posted by Stephen Humphries at 4:56 PM No comments: