Posted by Stephen Humphries at 6:41 PM No comments:

'Twas a pleasure to interview Steven Wilson for his new tour program. The focus of my piece is the live side of Steven's work. An in-depth look at artistry behind how Steven designs his concerts from the setlists to the staging, lighting, and visual display. The program is a handsome production thanks to the design of Carl Glover + photos by Lasse Hoile and Joe del Tufo. Look for it at Steven's current tour of Europe and upcoming US tour (see: http://stevenwilsonhq.com/sw/tour-dates/) 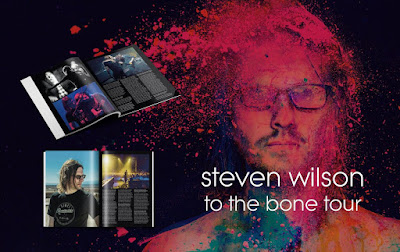 Here, below, are excerpts from the interview with SW that didn't make the cut for the tour program:

When you’re performing on stage, what sort of things go through your mind? Are you thinking, “I have to tap that guitar pedal in the next bar and then go over to the keyboard next?”

There comes a point where all those things have become automatic, they become instinct and you don’t even have to think about them. Actually, the worst thing that you can do is think about it too much. Because the moment I start to think about it, that’s when I suddenly panic and forget lyrics or what I’m supposed to do because you’re no longer relying on that subconscious instinct. So it’s better not to have that stuff in your mind.

When I'm actually in the middle of playing songs, I'm not sure what I'm thinking really. We have a lot of fun on stage and we have a lot of in-jokes. A lot of the time I might be thinking, “How can I put Craig off?” Or, “How can I make Nick laugh?”

How do you deal with hecklers?

The hecklers that I get at my shows tend to be smart-arses who want to shout something out to show everyone else how clever they are. Being a smart-arse myself, I enjoy engaging with those kind of people, in fact I’m probably guilty of conversing with them for too long sometimes. The band will start to look at their watches and wonder when we’re going to play the next song!

I guess I do talk quite a lot between songs. I can’t abide clichéd showbiz stage banter, so I’ve learned that it’s best to talk to an audience like you’re talking to a single person one-on-one, relaxed and don’t be self-conscious about what you’re saying. That way you’re not doing the “reading from a script” thing.

Do you ever find your mind wandering—seeing someone in the audience that you recognize or who looks interesting for some reason?

Sometimes you have people literally leaning over the front of the stage and you can’t help but engage with them. I might be admiring a pretty girl or marvelling at a particularly grotesque T-shirt someone in the front row might be wearing!  The one thing that’s very difficult to avoid is obsessing about someone in the audience that doesn’t seem to be enjoying it. They might be a partner who has been dragged along to the show; it’s not really their thing but they come along to keep their other half company. You start to fixate on that person. It’s almost like the show for me becomes just for that person. If I can make that person enjoy the show, then it’s a success!

What does an audience have to do to merit a rare additional, unplanned encore?

Haha! Obvious, just don’t let us feel like you’ve had enough, don’t let the enthusiasm drop. But they have to do it as a collective, it’s no good if just a few people are screaming for more, it has to be the whole audience. Although in theory the show ends when the setlist ends, I have been known to come back on for an impromptu extra song or two if the audience were passionate enough about it.

What sort of mishaps have you or other band members had on stage?

Ah, Spinal Tap again!  Well, we have a lot of visual elements in the show, as well as some audio on backing track, mainly sound design and backing vocals. Not massive amounts, but things that make the musical tapestry more immersive. Because of that, we have to play to a click track which synchronises the music with the visuals. I remember when we were on stage in Sao Paulo in Brazil and we made a big entrance playing “Luminol”, but for whatever reason, we got out of synchronisation with the backing track and all the backing vocals were coming in at all the wrong moments, it was a total train wreck!  So much so, that it was just not possible to recover, so after about 3 minutes into the 14-minute song, I said, “STOP THE SHOW!”, and made a joke about it with the audience. I told them, “We’re going to walk off stage and we’re going come back on stage pretending as if nothing happened.” And of course the audience loved it. The worst thing you can do is be embarrassed, because then they feel embarrassed too.


Posted by Stephen Humphries at 8:38 PM No comments: