Posted by Stephen Humphries at 3:32 PM No comments:

Now on Newsstands (and airline seats)

I wrote a short, front of book piece in the November issue of American Way (the in-flight magazine for American Airlines) about an ambitious multimedia Leonard Cohen exhibition in Montreal. (You can read the piece on page 18 via this link.)

The Museum of Contemporary Art's Leonard Cohen: A Crack in Everything isn't a gaudy Rock 'n' Roll Hall of Fame-style memorabilia display—don't go looking for his famous blue raincoat or fedoras. Instead, curator John Zeppetelli invited 40 artists from across the world to channel Cohen's influence into new works.

The troubadour’s words and melodies have been recontextualized in newly commissioned works that explore his recurring themes: love and lust, politics and war, religion and redemption.

“There was an endless, thwarted quest for happiness. But then also a kind of resignation. There is a crack in everything and that’s what allows the light to come in,” Mr. Zeppetelli, the museum director told me via a phone interview. 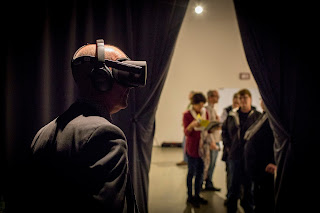 Visitors can enter a virtual, surround-sound concert room, whose four walls will display montages of Cohen performing hit songs such as “Suzanne” over several decades. Another listening space includes exclusive cover versions by musicians such as Moby, Julia Holter, and The National with Sufjan Stevens. Candice Breitz formed out an amateur choir of Cohen fans who recorded their own version of the artist's landmark album I'm Your Man. A video installation titled The Offerings explores Cohen’s philosophical outlook. There's also a Wurlitzer organ whose keys have each been programmed to trigger audio of the singer reading his own poems. Zach Richter created a virtual reality experience titled "Halleluljah." If, to quote a Cohen song, you want it darker, then spend some alone time in the Depression Box designed by Israeli filmmaker Ari Folman ("Waltz with Bashir).

The singer gave his blessing to the Museum of Contemporary Art to stage the exhibition A Crack in Everything, which includes items from his personal archives, including autobiographical sketches.

Planning for the exhibition was underway before the singer died in 2016. The exhibition took on a different tenor following his passing, Zeppetelli admitted. 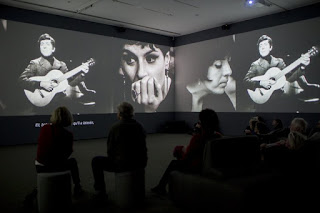 “We were planning for almost two years and fantasizing about inviting Leonard to the opening and showing him around just to demonstrate to him how vital his work has been, not just to his fans and music lovers, but to all kinds of people. He was very chuffed about that, that he could be an influence to people outside of his area, not songwriters and fans, but to other artists in different disciplines.”

The exhibition at the Musée d'art contemporain de Montréal runs through April 9, 2018.

Also on newsstands: The new issue of Prog magazine includes an interview I did with renowned Washington Post politics reporter David Weigel.

In addition to the demanding beat of covering Donald Trump on the campaign trail, Weigel wrote The Show that Never Ends: The Rise and Fall of Prog Rock. The hardcover edition, published by W.W. Norton, has been such a success that it quickly sold out its first print run. During my piece about Weigel's love of progressive rock, he told me about how he got turned on to Yes and got turned down by Robert Fripp.

The magazine includes exclusive interviews with Geddy Lee and Alex Lifeson of Rush (both of whom I was honored to interview when I wrote the book The Art of Rush) as well as Peter Hammill, Brian Eno, Godley & Creme, and Tim Bowness.

Posted by Stephen Humphries at 1:33 PM No comments: