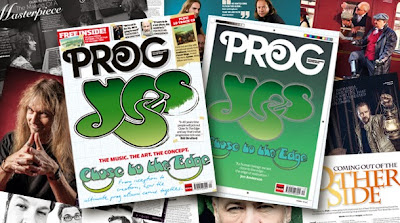 One of my most fun assignments was to fly to Las Vegas to attend a Yes-themed Rock 'n' Roll Fantasy Camp and write about it for Prog magazine. (The new issue is now on UK newsstands and very soon available on US newsstands, including Barnes & Noble. Or, if you can't wait that long, just download the issue onto your Kindle or iPad via iTunes.)

You may have heard about the Rock ’n’ Roll Fantasy Camp (or seen the affectionate spoof on it in The Simpsons episode with the Rolling Stones). The institution gives amateur musicians an opportunity to get up on stage to jam with bands and artists such as Steve Vai, Joe Perry, Slash, Judas Priest, Jeff Beck, Def Leppard, Sammy Hagar, Roger Daltrey, and many other luminaries.

In decades past, this sort of thing would be unheard of. The closest that rock fans could get to their idols was a front row seat at a concert. (The exception to the rule: Attractive women with the wiles to get backstage.) Indeed, rock 'n' roll camp founder David Fishof says, “When I was touring with rock bands, the bands always went out the back stage door, and out of the back door at hotels. They didn’t want to interact with fans. They were scared of them."

More than that, bands reveled in the fact that they were inaccessible and remote because it made them seem mythical.

Yes bass player Chris Squire admitted to me, “Back in the ’70s, one often hired a publicist to make sure that there was a bare minimum of interviews with the press as it was generally thought that this would increase the artists' mystique."

Nowadays, Squire and the other members of Yes are active on social media, interacting with fans, answering questions and offering music recommendations.

As Squire put it, "In the last 10 years, we have been increasingly been made aware of the fact that we now live in the world of social media and conversely from the past we have now been recommended by our current webmasters that interaction is a part of general life."

Fishof observes, "Bands now realize that these fans are the ones that kept them alive and they’re more appreciative.”

This year, Yes met some of their biggest fans at the rock 'n' roll fantasy camp. It was wholly new territory for all the band members except drummer Alan White. He'd participated in 10 previous camps and felt very much at home. He seems to enjoy the chance to mentor amateur musicians.

"I have had people in my class who kind of noodle," said White. "They want to prove they can do all kinds of stuff but I keep telling them, ‘Stop!’ They’ve got to listen to what’s going on around them. They benefit from it by the final day by being able to get up there with confidence and play the music and feel good about it. Some people are really, really good. You don’t have to say a word, you wonder sometimes why they’re at the camp because they’re such excellent musicians."

Part of the fun of reporting the story was meeting the amateur musicians themselves. Case in point, Gary Birch, a Software application architect from St. Paul, Minnesota, who told me, " I literally have been dreaming about standing on stage and playing with Yes since 1972. I don’t know if you could ask for anything better."

His wife, Janell, observed, "I listened to Yes since we got married since 1978. I tell you, we just needed to come here because I just wanted to support this whole camp with Yes because he looks younger, acts younger when he’s around this."

The band members in Yes were all friendly and happy to chat about their camp experience. I was particularly impressed with new singer Jon Davison, a sweet guy and one helluva singer.

Yes is currently working on new material for an album. Next year, they'll tour the UK and Europe to perform their albums The Yes Album, Close to the Edge, and Going for the One each night. Here's my recent interview with Yes guitarist Steve Howe about the tour.

Posted by Stephen Humphries at 8:24 PM No comments: