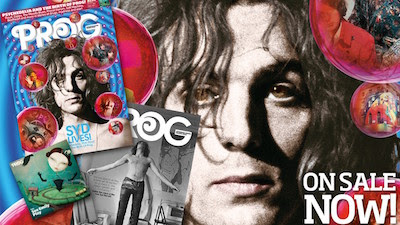 Nowadays, it's not often a band comes along with a sound so unique that you can't really compare them to other artists.

Bent Knee, a six-piece from Boston, is one such band. They don't sound derivative of anyone else. As a recent The Wall Street Journal feature on the band put it, their sound taps into cabaret, ’70s piano-based folk, chamber pop, industrial rock, metal, prog rock and more.

The Boston Globe noted that they're making a bid for the big time and ran a great review of the band's latest album, Say So.

In the latest issue of Prog magazine, now on newsstands and available digitally, I interviewed the band about their horror stories about touring America in a small van and delved into the tight familial bonds between these six musicians. (I wouldn't classify Bent Knee as "prog rock" band; just very progressive in the uniqueness of their sound.)

To get a feel for the band's sound, check out the music videos below. "Leak Water," from their just-released album Say So, is about how a young girl endures the beauty regime her mother submits her to every morning. "Good Girl" is about battling societal gender expectations.

The video of "Being Human," from the band's previous album, Shiny Eyed Babies, showcases how remarkable this band is live—you won't be able to take your eyes off them. (Look for their fall tour dates at http://www.bentkneemusic.com/tour.)

More details on the band and its albums at www.bentkneemusic.com

Posted by Stephen Humphries at 1:16 PM No comments: