Posted by Stephen Humphries at 11:18 PM No comments: 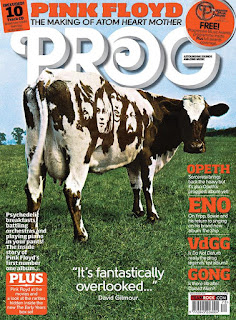 The latest issue of Prog magazine includes a couple of contributions from me. I wrote a short retrospective piece about Toni Childs' great album The Woman's Boat. (She's one of my favorite singers - listen to this song, "I Just Want Affection," from that album to hear her incredible and unique voice.)

I also reviewed two albums by two Porcupine Tree musicians. 1) Songwriter and guitarist John Wesley's A Way You'll Never Be showcases a tougher, grungier sound and some of his greatest guitar solos ever. Hear "By the Light of the Sun" and hear the title track here. 2) Burnt Belief is an instrumental group consisting of bassist Colin Edwin and Boston-based touch guitarist Jon Durant. Their third album, Emergent, consists of instrumentals that ventures into unearthly realms. Hear "Ghost Aquatic" from the album.