S
Posted by Stephen Humphries at 12:23 AM No comments:

My interview with Loma in The Boston Globe 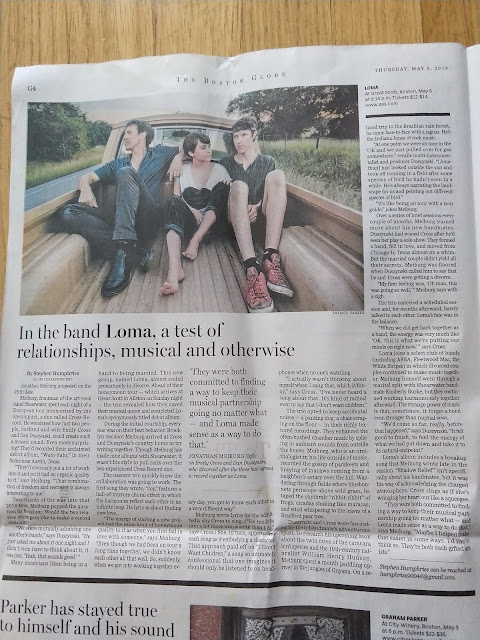 Many musicians compare being in a band to a marriage. In the case of Loma, their debut album almost prematurely ended in divorce.

I'd been anticipating the trio's eponymously titled debut for quite some time. Loma is a hybrid of two great groups from Austin: Jonathan Meiburg from Shearwater + the two members of Cross Record. Shearwater has long been one of my top-five favorite bands. I first came across the band's 2007 masterpiece Rook and I think my review of it at the time, below, captures my astonishment at my discovery. It was like finding America's answer to Talk Talk.


This Texan art-rock group, fronted by Jonathan Meiburg, has caught the ear of music critics but has yet to colonize the charts. Perhaps that's because there's little evidence that the four-piece has ever thumbed through the Lennon/McCartney songbook. There are few discernible choruses and the tracks eschew conventional pop-song structures. Opening track "On the Death of the Waters," for example, is structured like a bell curve: It starts out hushed as a prayer, swells into an outburst of guitar and trumpet, and then subsides into the ether once again. That's not to say that Shearwater can't pen a good hook. "Rooks" is propelled by a sure-footed backbeat, a glissando guitar progression, and horns straight out of Morricone Western as Meiburg, a part-time ornithologist, sings of birds ensnared in washing lines to evoke the natural order in disarray. Just as compelling: "Leviathan, Bound" is built on a duet between a hammered dulcimer and a piano. Elsewhere, the band employs violins, harp, banjo, tuba, French horn, trombone, and vibraphone, but the organic music feels minimalist and spacious rather than baroque and cluttered. Shearwater's main instrument, however, is Meiburg's one-in-a-million voice, a sonorous vessel of unfiltered emotion. The headphone album of the year.


Since then, I've done many interviews with Shearwater's songwriter, singer, guitarist and sole constant member Jonathan Meiburg. (See the right-hand side column of this page to find them.) He's one of rock music's most intelligent, erudite, and interesting musicians. Who else spends their spare time outside of music doing ornithological research in some of the world's remotest regions. Over the years, Jonathan's work as a naturalist has taken him to the Falklands, Masoala peninsula of Madagascar, the Chatham Islands of New Zealand, a tiny Inuit village in the Canadian Arctic, and an Aboriginal settlement in the croc-filled swamps of northern Australia? Jonathan was once stranded for a month on an uninhabited volcanic desert island.

One of my favorite aspects of Shearwater is that its sound is constantly evolving. So when I heard that Meiburg was making an album with the duo Cross Record (who were the impressive support act on the last Shearwater tour), I was highly intrigued by the prospect of the collaboration. But then I heard a rumor that the project had fallen disastrously apart.

I recently interviewed Loma for The Boston Globe to get the full, fascinating story of how they overcame difficult circumstances to finish their glorious debut record - You can read the story here.
Catch Loma's current tour of the US and Europe at these dates: https://www.subpop.com/artists/loma/tours


Posted by Stephen Humphries at 12:18 AM No comments: