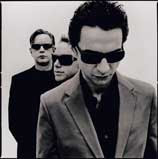 Depeche Mode has experienced more trials and tribulations than most bands. The surprise departure of keyboardist Alan Wilder. Vocalist Dave Gahan's heroin addiction and near-death overdose. And, most of all, songwriter Martin Gore's pechant for vamping on stage in mohawk headgear, S&M leather, suspenders, and a pair of angel wings that look daft even on half-naked Victoria's Secret models.
For all that, they've made some pretty terrific music -- except for lately. The band's last good album was "Ultra," and that was 10 years ago. The albums since then, "Exciter" and "Playing the Angel," have each boasted just one or two good tunes. On the plus side of that ledger, Gahan has become a more soulful vocalist over those two records -- a post-addiction clarity. So I was hoping that he'd been hoarding all the best tunes for his own second solo album, "Hourglass." Sadly, that's hardly the case (my review, here). But I'm rooting for the boys when they return with a new record in 2008. Because they were doing what The Killers do when Brandon Flowers was still in his pram. And they do it better.
Posted by Stephen Humphries at 10:40 PM No comments:

No media hoopla for Jesca 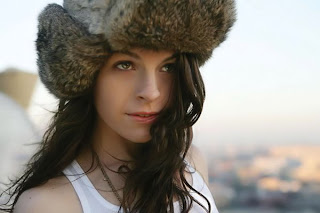 Is it too soon to call singers such as Feist, Bats for Lashes, Joanna Newsom, Siohan Donaghy, and Laura Veers and Saltbreakers a movement? These artists seem to be taking their musical cues from Kate Bush and Bjork, using their otherworldly voices to venture into mystical, avant realms.

Of all these new female artists, Jesca Hoop (above) seems to have attracted the least attention even though her artistry towers above all the other new kittens on the block. "Kismet" is one of the year's best records and my most precious find of 2007 (my review here). Hoop's fortunes could change overnight if someone would just teach her a cute dance move and film it for an iPod ad.
Posted by Stephen Humphries at 7:44 PM No comments: 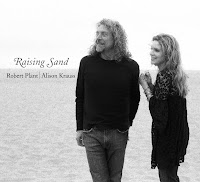 Here's my review of "Raising Sand" by Robert Plant & Alison Krauss, one of the best records of the year. (Released Oct. 23.) The album title, incidentally, seems to have been lifted from the lyrics of "Freedom Fries," a track on Plant's 2005 "Mighty Rearranger" album.
Posted by Stephen Humphries at 11:01 PM No comments:

Here's a fascinating interview with Jimmy Page and John Paul Jones on how the Zep reunion came to fruition – and a few coy bombshell hints about the trio's future beyond the show. But I wonder whether this is all wishful thinking on Page's part.

When I interviewed Robert Plant a few years ago, he reiterated the philosophy that has guided most of his career: Keep Looking Forward. As Plant told BBC radio recently, the Zep gig is a one-off. It's a chance to pay tribute to mentor Ahmet Ertegun. And an opportunity to banish memories of the remaining trio's disastrous reunions at 1985's Live Aid and the 1988 Atlantic Records 40th Anniversary bash. (Zep trivia: A further reunion took place in 1995 for Zeppelin's induction into the Rock 'n' Roll Hall of Fame -- that barely rehearsed performance, featuring guests Steven Tyler, Joe Perry, and Neil Young, was pretty good. The trio has also reformed for two other private shows: Carmen Plant's 21st birthday and Jason Bonham's wedding.)

Plant's dance card also seems to be full for the foreseeable future. The singer is due to tour with Alison Krauss in support of their superb "Raising Sand" album next year. Moreover, having toured with his band, Strange Sensation, in Europe this summer, Plant is already looking ahead to the followup to "Mighty Rearranger" (one of my favorite albums in recent years and Plant's second-best solo album after 1993's "Fate of Nations"). In December, goldie locks told Rolling Stone that he gave each member of Strange Sensation a list of song titles for the next album and told them to go write music for each one. (Plant has always been a little slow at coming up with lyrics.)

For those readers in the US, Robert Plant and Alison Krauss will be on The Today Show on Wednesday Oct. 24 and they are also scheduled for The Charlie Rose Show on PBS, too, though the run date of that interview hasn't been announced.
Posted by Stephen Humphries at 1:35 AM No comments:

To date, Radiohead's "In Rainbows" has generated so much electronic ink that album-related search terms probably now have their very own server farm over at Google. Radiohead's long-awaited followup to 2003's "Hail to The Thief" has eclipsed even Madonna's deal with Live Nation. (Madge only attracts major attention when she scoops up orphans from Africa.)

When I saw Radiohead at Boston's waterside pavillion during a good, if unevenly paced, set last year they previewed much of the then-unrecorded album, including "15 Step," "Nude," "Videotape," "House of Cards," "Arpeggi," and the soon-to-be released "Bangers 'n' Mash." So how did the resulting album turn out? Here's my review of "In Rainbows," which ran Friday 12.
Posted by Stephen Humphries at 12:58 AM No comments:

Chalk up another success for PJ Harvey

I approached the new PJ Harvey album with some trepidation after reading a poor reviews of it in USA TODAY and Entertainment Weekly. I love "Stories from the City, Stories from the Sea" and "Uh Huh Her" as well as the best parts of "Is This Desire?" But on "White Chalk," she sings the songs in a child's voice falsetto and most of the songs are just voice + piano. Subjects range from having an abortion to murder-ballad slashery with lyrics such as, "Hit her with a hammer/ teeth smashed in/ red tongue's twitching/ look inside her skeleton." Even Harvey's old paramour, Nick Cave, might blanch at that imagery -- and he writes this stuff as his day job while sitting in his office in customary business-suit attire.

It's certainly not an album to recommend to PJ newbies, then. Or one to play for Dido fans. That said, if initial impressions are anything to go by, then this'll place in my top 10 albums of 2007. I love how she's once again pushed forward as an artist rather than opting to repeat herself.

The album comes with a curfew: Play it after dawn and it loses its power. This is music for the unearthly hours of the morning. This stark, stripped-down album sounds as if it was recorded in an abandoned mental asylum and it is more quietly terrifying than Bass Communion's "Ghosts on Magnetic Tape." It's PJ's sheer emotional intimacy that is so unsettling. And yet distressingly beautiful. Quite a few lovely, if unconventional, melodies on the album, actually, and "Silence" is one of the best songs Polly Jean's ever written. The ending, where she multitracks her voice into a spectral choir, is gorgeous. Looking forward to further midnight visits with this record.
Posted by Stephen Humphries at 12:07 AM No comments:

Email ThisBlogThis!Share to TwitterShare to FacebookShare to Pinterest
Labels: Chalk up another success for PJ Harvey
Newer Posts Home
Subscribe to: Posts (Atom)