Posted by Stephen Humphries at 12:48 PM No comments:

By the time I got to Woodstock... 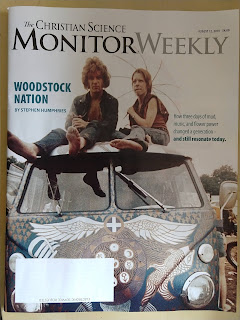 During a trip to Bethel, New York, to report a story about the 50th anniversary of the Woodstock festival, I met three recent college graduates in the parking lot outside the Woodstock museum.

They were agog at the difference between that concert and modern-day festivals. It wasn't just the cost of a $7 ticket versus a $300 ticket to today’s extravaganzas, but also the degree of communal openness at Woodstock.

“You know any of the festivals I've ever gone to, people liked to isolate themselves and kind of set up their own camps with the people that they were there with,” said one.

“I've definitely seen a lot of pictures where people were like, nude, swimming in the river nearby,” said another, who was wearing a Pink Floyd T-shirt. “No, I don't think I could imagine anyone doing that.”

“I can't imagine my grandmother having ever been here,” added the first student. “And she was.”

The story I wrote, all 3000 words of it, was about how the iconic festival shaped a generation - and how that generation both resembles and differs from the young iGen today.

It's the cover story of this week's issue of The Christian Science Monitor magazine. You can also read it online at this link.

Posted by Stephen Humphries at 12:48 PM No comments: