Posted by Stephen Humphries at 4:36 PM No comments: 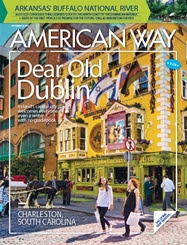 The new issue of American Way, the flight magazine of American Airlines, includes a brief interview I did with Elvis Costello and The Roots about their utterly superb album, Wise Up Ghost. (You can read the piece here.)

"It just came out of some curiosity about what would happen if we started putting our ideas together. And we did it without really saying more than a few words to one another," Elvis told me during our phone conversation. "I’d played with The Roots on the Fallon show on a couple of different occasions and they had come up with a great approach to some songs from my catalog. The last time I went in to do a couple of Bruce Springsteen songs – they were doing a run of nights from Bruce’s catalog. So we played a bunch of different music together and we started laying things down. We didn’t really tell anybody we were doing it."

Elvis somehow managed to fit into the band's busy schedule. The band's iconic drummer, Ahmir “Questlove” Thompson, told me that their gig as the house band for Jimmy Fallon means that they often work 17 hour days, so Elvis sometimes had to record with them as late as 1 a.m.

By all accounts, they had wonderful chemistry from the off. "Kirk is a wonderful guitar player," Costello told me. "Everything from the sousaphone to the percussion to the keyboards that Ray Angry and the other guys put in is just tremendous."

For his part, Questlove was impressed with the Costello’s lyrics as well as the beauty he brought to the album’s two ballads. “‘Tripwire’ is about love in the time of the Apocalypse,” explained Questlove. “‘If I Could Believe’ was his song about grieving the death of his father.”

"There’s no conventional harmony to the bulk of the songs," added Costello. "And then when that comes along in a couple of songs like ‘Tripwire’ and ‘If I Could Believe,’ then it’s a real genuine release,” says Costello. “I found that very stimulating and very provocative.”

Wise Up Ghost is one of my favorite albums of the year. Check out the video for the lead single, below.

Posted by Stephen Humphries at 7:19 PM No comments: 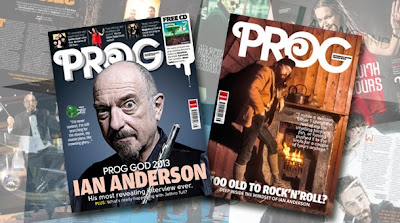 I wrote lengthy features about Elbow and Blackfield for the new issue of Prog magazine, now on UK newsstands (£5.99 in WHSmith) and very soon available on US newsstands, including Barnes & Noble. Or, if you can't wait that long, just download the issue onto your Kindle or iPad via iTunes.

I thought I'd share a few tidbits from both interviews that ended up on the cutting-room floor...

I wrote about the new album by Blackfield, the band consisting of Aviv Geffen and Steven Wilson, which marks a new era for the band. Technically, Blackfield isn't supposed to be a duo anymore. Wilson stated that he'd only be a guest contributor on this new album because he is focused on his very successful solo career. Turns out that the situation isn't that simple - as I explain in my article, Wilson was extensively involved in Blackfield IV. The album includes guest vocals by Vincent Cavanagh from Anathema, Brett Anderson from Suede, and Jonathan Donahue from Mercury Rev. I chatted to Geffen at his home in Tel Aviv - here's a few excerpts that didn't make it into the piece.

“In a way, it’s the most balanced album," said Geffen, his accent as heavy as the black eyeliner he often wears on stage. "It has songs like ‘Pills,’ which is the classic Blackfield sound, and on the last song you’ve got some dubstep. There are many angles on this album.”

Geffen is definitely the leader of the group now and that portends some stylistic changes. As he explained, “I’m a good friend of Coldplay, for example, and I think Blackfield should go in that path.”

I also interviewed Guy Garvey, the singer of Elbow, about each of the British band's albums and got a glimpse into the progressive direction of their next record. Elbow is one of Britain's biggest bands but, alas, hasn't become anything close to a household name in the USA. (Elbow's "Grounds for Divorce" was, however, recently used for a jeans ad on US television.)

If you've not listened to Elbow, seek them out. Their distinctive sound consists of the Peter-Gabriel-like vocals of Guy Garvey, one of rock's most literate lyricists, and the exploration of the space between notes. Their understanding of light-and-shade dynamics (which is influenced by Talk Talk) creates an intimate grandeur. If you've never heard them, check out the videos at the end of this piece.

Garvey is always a wonderful interview (here's a link to my previous chat with him) so I thought I'd share some of the stuff that didn't make it into my story.


"The effect is has on an audience, especially in an arena, is so overwhelming. It's an extension of the themes that we tried to include on Cast of Thousands. I think, a lot of the time, a band will shy away from big, joyous sing-a-longs. I think, sometimes that's right. But often it's wrong. It's quite vain and, in many ways, it's a little selfish to deny those moments. Thousands and thousands and thousands of people got married to that song, for obvious reasons. That's more important than the fact that it accompanied two Olympic games with the BBC, it's more important than the fact that people have covered it, that's it's blown up and changed our fortunes. The best thing about it is that ordinary people fell in love to, and got married to, our music.


On the album format:


I read some statistics the other day, 16 to 25 year olds are going back to the album as a format. It was a music industry survey. And 16 to 25 year olds are missing that feeling of ownership. They're realizing that, if you listen to an album from start to finish, you can lose yourself within it and maybe even change the way you think about something. We've always been an album band.  We're very good friends with I am Kloot. You probably know that Craig and I produced their records. For them, song is the end product. The recording is a version of the song. But the song is the art. Whereas, for us, the album is the end product and everything else is just versions of that.


About the next album, which was mooted to have a song titled "Cold Morning" on it:

"Cold Morning"? Wow. It's actually been sidelined. I am sure it will be [a future B-side]. This is something about the album-writing process. You start somewhere, you have enough songs for a record and then you take the best one and that becomes your benchmark - everything has to reach that grade. And you keep doing that until you're told that you're out of time and that's when you start finessing your record, tying up the loose ends. We would never actually release an album without deadlines! We would just keep improving it forever.

About his song contributions to King Kong: The Musical:


3D - Robert Del Naja - from Massive Attack, I did some singing and writing for their last record. Love working with those boys. Rob's got a very free way of working. The first time I went to that studio, I sang for nine hours over various beats and bits of demo music they had. I used all the lyrics that I hadn't used on the previous Elbow record. Some woeful themes and we discovered some melodies. Rob says he's still harvesting from that one session. Every now and then, he'll be working on a tune and he'll see what he hasn't used from that session and they'll chop it up and retune it and sometimes even re-sing it and sometimes they don't.

Rob called me up and said, 'I'm involved in King Kong: The Musical.' We both laughed for five minutes. He said, 'It looks spectacular. The ape's going to be great.' He said, 'I've never done anything like this and they're asking for a lyricist.' I said, 'Well, I have absolutely no experience of musical theater. I've never been to a musical. ' I said, 'Yeah, why not. It's a bit of a challenge.'

The director was really enthusiastic about the song I've written for them. It was really good fun. It was so different than writing songs from my perspective for Elbow. I was given a character with a backstory. I was allowed to extend the backstory, as well, in order to find a lyric. Who knows what it'll sound like when it's finished, but Marius de Vries, the musical director, has worked with Elbow before. He's a wonderful man. I love working with him and I love working with Rob. It looks stunning. My first musical theater experience will be going to see a musical with some of my words in it!

When is Elbow going to sell a Rubik's cube modeled on the cube on the cover for The Seldom Seen Kid?


I had the exact same idea! They made some mock-ups, but Rubik's refused to manufacture a pure white cube. We got in touch with them and they said the only way they could do it would be to sell us naked Rubik's Cubes and they would sell us white stickers and we'd have to put them on by hand. No one at the record company was prepared to do that! So, the band have got one each. There's about 10 in existence. I've got one in my bedroom at home.


THE BONES OF YOU

Posted by Stephen Humphries at 4:58 PM No comments: