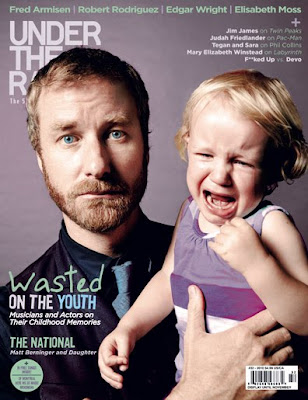 The "Wasted on Youth" issue of Under the Radar doesn't have a conventional magazine cover. But then, Under the Radar isn't a conventional magazine. True to its title, the magazine is serious about its mission to provide exposure to the best new bands on the planet. Whereas other music publications rely exclusively on publicists and record labels to feed them tips on who to cover, editor Mark Redfern scours MySpace to find unsigned acts to cover in the magazine's "Pleased to Meet You" section.

Not that the magazine is just devoted to obscure newbies. Under the Radar takes its tagline -- the Solution to Music Pollution -- to heart. In this issue (which includes several of my reviews and my interview with Portishead's Geoff Barrow), various musicians and actors look back on their formative years and the movies, TV shows, and bands that influenced them as children and teenagers.

The cover story features Matt Berninger, the lead-vocalist for The National, along with his one-and-half-year-old daughter, Isla. It also includes interviews with each member of The National about their childhood influences, including films as Tron and The Dark Crystal, such TV shows as The Muppet Show, and such bands as Talking Heads and Joy Division.

The Wasted on the Youth section also includes the following articles:

Fucked Up vs. Devo: A Conversation Between Damian Abraham and Mark Mothersbaugh

Here We Go Magic's Luke Temple on His Grandfather

Look Around You: Robert Popper and Peter Serafinowicz Rethink the Educational Film

Sigur Rós' Jónsi on Being a Metalhead

Scott Pilgrim vs. the World's Mary Elizabeth Winstead on Labyrinth

Posted by Stephen Humphries at 8:20 PM No comments: