Here's just a small selection of what's been in rotation this month:

Posted by Stephen Humphries at 4:32 PM No comments:

My Interview with Elbow

This week, the British band Elbow released its fifth album, build a rocket boys!, and, like its predecessors, it's a special record. (Never heard them before? Take a listen to this live-in-the-studio version of the new track "Lippy Kids" above. It's a great showcase for the voice of Guy Garvey, one of England's most soulful singers.)

For starters, the epic opener, "The Birds," is one of the best things they've ever done. I also love the single, "Neat Little Rows." There's a delightful whimsical pop song called "With Love" that is mainly built on the interview and interplay of multiple vocalists and features the Hallé Youth Orchestra.

Throughout the album there are some fabulous cascading guitar and piano riffs and motifs, like on "High Ideals." A few songs in the middle stretch -- “The Night Will Always Win,” “The River,” and “Jesus was a Rochdale Girl” -- are growers. The closing track, "Dear Friends," is a beaut. Classic Elbow.

In addition to my interview with Guy Garvey in the current issue of Under the Radar (see below), I also did a separate piece using leftover material from the interview for the magazine's website, which you can read here.

Posted by Stephen Humphries at 9:22 PM No comments:

Email ThisBlogThis!Share to TwitterShare to FacebookShare to Pinterest
Labels: Elbow 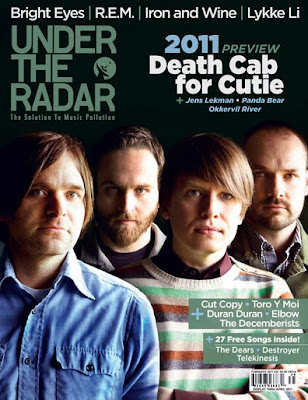 The latest issue of Under the Radar, America's best magazine for indie music and underground artists, is now on newsstands. I interviewed Elbow's Guy Garvey for the issue.

In addition to feature stories on Iron & Wine, R.E.M., Lykke Li, The Decemberists and Death Cab for Cutie, the issue also includes interviews with promising newcomers such as Anna Calvi and Porcelain Raft. Check it out!
Posted by Stephen Humphries at 5:39 PM No comments: