Posted by Stephen Humphries at 4:01 PM No comments:

My Robert Plant interview in The Boston Globe 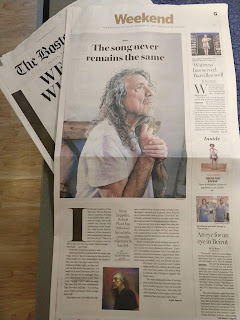 I interviewed Robert Plant for today's Boston Globe. (You can read the online version here.)

It's the third time I've interviewed the singer, who is my all-time favorite artist. (You can read the other two pieces here and here.) The first album I ever bought, at age 12, was Robert Plant's Shaken 'n' Stirred upon its release in 1985. I'm not sure I had even heard of Led Zeppelin at that point but all I knew was that the lead single, "Little by Little," was the greatest thing I had ever heard (check out the music video, below).


Since then, I've followed every step of the vocalist's career. I love the fact that every one of his records is different and that I have no idea what he'll do next. He's one of the few artists of his vintage who hasn't lost his artistic thirst and curiosity, a theme I explored in my piece. I think that the reason I'm drawn to his work time and time again is that he's such an expressive singer - he doesn't feign emotion, he channels his most intimate feelings into his vocals.

If you're unfamiliar with much of Plant's solo career, then I'd recommend his latest album Carry Fire (2017), Mighty Rearranger (2005), and Fate of Nations (1993) for starters. Or try this Spotify playlist, below, compiled by Plant himself as a survey of some of his best songs.

Posted by Stephen Humphries at 9:54 AM No comments: