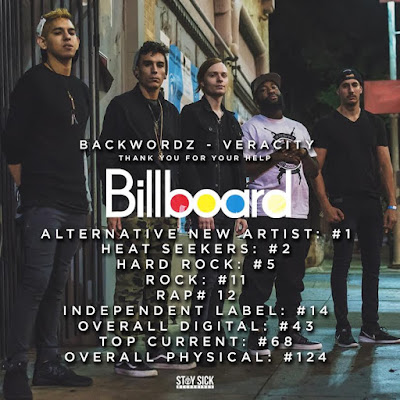 Meet Backwordz, a band that bills itself as "the liberarian Rage Against the Machine." Their debut album, Veracity, is racing up the chartz,  I interviewed Eric July, the frontman of the Dallas five-piece band, for the new issue of Reason magazine.

The band's grindcore guitars and spitball rapping isn't the heaviest aspect of Backwordz. It's the message. The single "Statism" declares that taxation as theft and questions the government's monopoly on violence and its role in so many other areas of life.

The larynx-shredding anthem “Utopias Don’t Exist” challenges the Black Lives Matter narrative that police violence against African-Americans is primarily motivated by racism. And when was the last time you heard a song called “Democracy Sucks”?

When he isn’t recording or touring, Backwordz frontman July, 27, pens articles at Libertarian Republic and works as a multimedia producer for the website Being Libertarian. But long before he started wearing a hoodie with a picture of Ron Paul on it, he was once a staunch supporter of Barack Obama and a member of an inner-city gang.

“People think of libertarianism as old, white people like the Koch brothers,” the MC told me. “It’s cool to be able to get out there and talk to people because I come from a different avenue and what led me to libertarianism.”

It was a pleasure to talk to a fellow libertarian about his intellectual journey and why Backwordz is on a mission to share ideas on liberty with its listeners. A condensed version of the interview appears in the pages of the new issue of Reason, but you can read the full interview here on its website. (While you are on the website, poke around the libertarian magazine's blog, Hit & Run, which is an indispensable daily read for its insights into subjects in the news and other newsworthy subjects you haven't seen in the news.)

Here's a couple of the band's music videos. Not the faint of ear...

Posted by Stephen Humphries at 1:45 PM No comments: