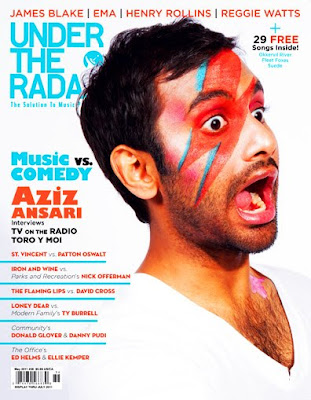 Of late, I've been drastically paring back my journalism to concentrate on writing my first novel, a literary thriller (doesn't that sound pretentious!) However, I do have a couple of reviews in the brand new issue of Under the Radar.

The magazine, which is the best publication for underground and indie music, has just released its first Music Vs. Comedy issue and it features crossover interviews between the likes of The Flaming Lips' Wayne Coyne and David Cross, Patton Oswalt and St. Vincent, Modern Family's Ty Burrell and Loney Dear, and Aziz Ansari (pictured on the cover, above) interviewing Toro Y Moi and TV on the Radio. And you'll want to read the magazine's interview with the adorable Ellie Kemper (The Office, Bridesmaids). At one point, Kemper quips, "I ended up majoring in English, which I'm not particularly fluent in."
Posted by Stephen Humphries at 11:48 PM No comments:

Posted by Stephen Humphries at 11:03 PM No comments: