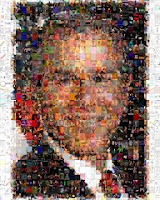 What would the ideal American president look like? The public’s idea of what qualities the president should embody is very apparent in pop culture. The occupant of the oval office has also come to be seen as almost a superhero figure – here in there are dozens of posters of Barack Obama in a Superman outfit -- and we’ve seen image in pop culture in movies such as “Air Force One” and “Independence Day.”

But pop culture, for the most part, has not been kind to George W. Bush, as I wrote in my latest piece.

Posted by Stephen Humphries at 12:46 AM No comments: