Posted by Stephen Humphries at 6:43 PM No comments: 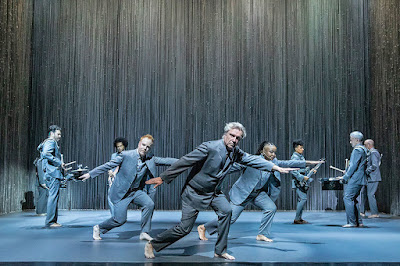 If you're in New York between now and early January, go see David Byrne's American Utopia on Broadway. He has completely reinvented what a pop concert can be. Find out more by reading my new interview with choreographer Annie-B Parson on how she helped Byrne (who answered my questions via email) to realize his brilliant vision. One of the best shows I've ever seen.

What distinguishes a truly indelible concert from a good one? I got to thinking about that when I answered a quiz circulating on Twitter (see below) about one’s concertgoing history.

In thinking about the hundreds of shows I’ve seen, I came to the conclusion that three qualities truly elevate a show. The first, naturally, is a dynamic performance. I’m thinking of Prince in Los Angeles, 2011. I watched the human dynamo play a three-hour concert in which his spontaneous fifth encore was 15 minutes after the houselights had come on and half the audience had left.

The second ingredient is an unexpected surprise. When Peter Gabriel performed “In Your Eyes” at the Hollywood Bowl, John Cusack ventured onstage – boombox in hand – in homage to that song’s role in the famous scene from “Say Anything.”

The third, perhaps most underappreciated element, is what happens in between songs. Some bands never say a single word to the audience. By contrast, indie-pop singer Feist made an unforgettable 2017 theater show feel like a campfire singalong among friends.

After the audience joined in on a complex harmony, the Canadian songwriter joked, "You're all hired for the band. Tour bus leaves at 10:15 for Toronto. Get your passports. I suppose that would make you defectors!"

At one point, Feist glanced up when my wife did a bird whistle before the start of the avian-themed "Caught a Long Wind." The two began exchanging bird calls.

Isn’t connection the quality we yearn for most in music? It can happen when recorded sounds in one’s headphones make one feel an ethereal bond with artists – together, but alone. But it’s extra-special when hundreds of enthralled strangers join in musical fellowship, like that evening with Feist.

Posted by Stephen Humphries at 6:43 PM No comments: