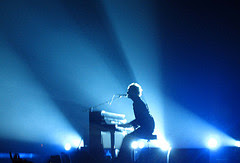 But once I’d brushed aside poor-to-middling songs such as “The Hardest Part” and “Swallowed by the Sea,” I was pleased to reacquaint myself with “Talk” and “Square One.” Moreover, I can confidently declare “Low” – with its euphoric climax swooping in, cavalry-like, at the last minute – to be the greatest achievement of the band’s young career. A concert highlight, too. But the real rediscovery for me was “Twisted Logic,” the final song (if you don't include the faux Cash country tune, "Til Kingdom Come," tacked on as a hidden track). Here, Johnny Buckland's guitar becomes jaggedly majestic, taking on all comers, going out like Tony Montana in a six-string firestorm.
The best moments of "X&Y" remind me why I fell for this band 7 years ago and I trust that Eno will do for them what he did for U2 following that group's similar "Rattle and Hum" debacle. Promisingly, the band states that this next album will be a disciplined 42 minutes and, they declare, "As you'd expect with Brian Eno, there's experimentation and exploration. But the music still has integrity. It's real and honest. There's no posturing or bombast."
P.S. Photo of Coldplay in Barcelona courtesy of Fibrcool over at Flickr's Creative Commons area.
Posted by Stephen Humphries at 11:24 PM