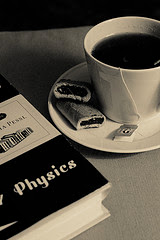 Here's what I've been reading, watching, and listening to over the past week.

READING: "Special Topics in Calamity Physics," Marisha Pessl's heartbreaking work of staggering genius. Her highly regarded debut novel, now in paperback, is about a precocious teen girl whose world becomes unmoored when her school teacher is murdered. What makes it such kicky fun is the narrator's conceit of turning every observation into a book reference (it's part Great Books of Western Civ. and part made-up titles and authors). Though slow off the starter blocks, the plot is terrific once it finally comes into focus. Best of all is Pessl's way with a metaphor. She's every bit the equal of a Kate Atkinson or Jodi Picoult in that department. If there's a weakness, though, it's that Pessl loads so many of them into each page that the explosions of literary fireworks are ultimately exhausting. A little less might add up to more of an impact. Still, great book and I can't wait to see what she does next.
Magazine-wise, it's the most recent issues of Variety, Word, Uncut, EW, and the new Q magazine (Madonna cover on the latter, which includes tantalizing features on Goldfrapp and why Bat for Lashes loves Kate Bush).

LISTENING TO: I'm knocked out by Santogold's debut album. Best to read my review of it, which is far more eloquent than anything I can summon at this late hour. This African-American New Yorker, suddenly the name on every hipsters lips, is a very exciting talent and her unbelievably hooky songs should, by rights, become the anthems of the summer even though Top 40 radio will stick with the anodyne Leona Lewis.

The new record by British art rock duo No-Man just dropped through the mailbox. Melancholy and infinite sadness has seldom sounded as beautiful as this latest collaboration between Porcupine Tree's Steven Wilson and singer Tim Bowness.
My wife and I went to see the US debut of Amy McDon 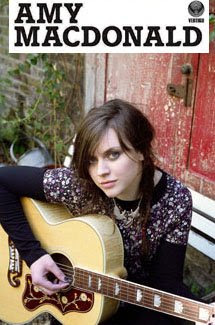 ald in front of about 150 people in a bar. Barely out of her teens, the fetching singer's debut, "This is the Life," has already topped the British album charts and is due for an August release here. What distinguishes McDonald from other young Brits currently campaigning for their careers in the US is that she sings her catchy, acoustic-guitar based pop songs in a native Scottish accent. (My wife wished for "Trainspotter"-style subtitles to understand McDonald's between-song banter.) She has a very powerful voice that's often fairly deep -- a refreshing alternative to all the sopranos on radio right now. The effusive crowd was easily won over as she and her band played several terrific songs such as "Run," "My Rock and Roll" and "This Is the Life," all of which you can hear on her MySpace page.

WATCHING: I attended the final night of Boston's 48-Hour Film Festival. For those unfamiliar with these festivals, which take place all over the world now, the concept is this: Teams of filmmakers have to write, film, and edit a movie within just 2 days. The teams show up at a venue on a Friday evening and are randomly assigned a genre and a prop, line of dialogue, and character that they must incorporate into their stories. This time around, the character was a diplomat named Reginal H. Higginbotham, the prop was a receipt of some sort, and the line of dialogue was, "This is going to get complicated." Indeed. Amazing what some of these filmmakers accomplished on a budget that makes an Ed Wood film seem like that of "Titanic." The final night culled the 12 best films out of 70 plus entries and many were highly enjoyable, including the winners who, saddled with the genre of historical fiction, created an MTV spoof set around the Treaty of Versailles titled "The Real World: Versailles."
Saw "Iron Man" at the cinema. It adheres to all the superhero movie conventions -- creating the suit, the final show down with the villain, the obligatory Stan Lee cameo -- but it's great fun because Robert Downey Jr. makes it so. In fact, this is the best counter-intuitive blockbuster casting since Johnny Depp was hired for "Pirates of the Caribbean." Gwyneth Paltrow is unusually appealing, too, and does a lot with an Olsen-thin role. Great to see her in a role where she's not moping. Stay through the end credits as there is a hidden scene right at the end featuring an unbilled A-List (and sometimes B-List) actor. 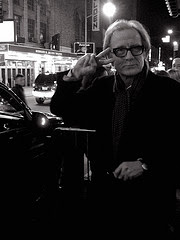 And, finally, I'm watching the BBC miniseries "State of Play" on DVD. It's a political thriller about the connection between a girl who was pushed to her death on the London Tube and an assassination of a pick pocket. Much of it is set inside a newspaper newsroom with Bill Nighy (l.) playing the sort of editor I wished had. Russell Crowe is involved in a Hollywood remake costarring Helen Mirren, Rachel McAdams, and Ed Norton. Yeah, I know. Sounds like a dream cast. But we thought the same thing when Kate Winslet, Sean Penn, Jude Law, and James Gandolfini signed for the ill-advised remake of "All the King's Men." Good luck to this crew in trying to top the original "State of Play"...
Posted by Stephen Humphries at 10:57 PM