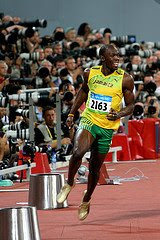 What an Olympics it's been. Michael Phelps can give up swimming now that he walks on water in the eyes of the world. For me, the most amazing spectacle -- other than the opening ceremony -- was watching Usian "lightning" Bolt, the giant Jamaican sprinter with grasshopper legs, casually stride to a world record 100 meters without even running at his full capacity. Memo to Hollywood casting directors: Outfit this guy in a red superhero suit for a movie version of The Flash and you won't need to spend a dime on special effects.

Great to see Jimmy Page riffing "Whole Lotta Love" during the closing ceremonies in a duet with Leona Lewis. A surprise collaboration, you say? Well, not so much when you consider that the riffmeister has hooked up with Puff Daddy (as he was known back then) and David Coverdale.
Posted by Stephen Humphries at 7:22 PM