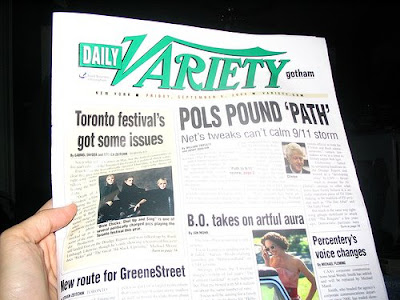 Today's layoffs at Variety -- including the flabbergasting decision to "ankle" columnist and reporter Anne Thompson -- may have hinged on Thursday's Oscar nominations, according to a convincing analysis by The Hot Blog's David Poland.

A few months ago, Peter Bart wrote a column bemoaning the lack of Oscar-related ads in Variety. But despite a late burst of spending activity -- including 7 full-page ads for "Revolutionary Road" in one issue of The New York Times -- spending is down this year, and the 2009 nominations didn't help things. Apart from Paramount's "Benjamin Button," the Academy largely locked out big studio fare such as "The Dark Knight" and "Wall-E" in favor of smaller releases by specialty wings and independents.

As previously noted, Warner Bros. may have been secretly relieved. Last week, WB laid off more than 800 employees. It would have been impolitik for the studio to have devoted millions more to "The Dark Knight" campaign when that cash could have saved a few jobs. At any rate, Heath Ledger is already a certain winner for Best Supporting Actor. Similarly, Disney knows that its dark horse, "Wall-E," may have lost the Best Picture derby but is a sure bet in the Animated category.

Despite today's cutbacks, Variety will weather the severe economic downturn. Its rival, The Hollywood Reporter, is in freefall. Even if no buyer steps forward to purchase Variety -- which recently moved into flashy new digs -- Reed Business Information is cleverly consolidating its trade publications into market-based divisions. But Variety is rumored to be shuttering its weekly edition, which I always valued for its stand-back perspectives from the daily news. And I wonder whether the trade will ultimately regret pink slipping Thompson given her encyclopedic film knowledge, her deep sources in the Hollywood community, and her uncanny ability to pinpoint unknown up and comers in the industry. Much of her success, I think, comes not only from her undiminished enthusiasm for all types of cinema, but because I've always found her to be warm and genial. No wonder she gets the best out of her interviewees. The good news is that Anne herself reports that her blog will live on and that she has other exciting ventures in the works.
Posted by Stephen Humphries at 4:17 AM