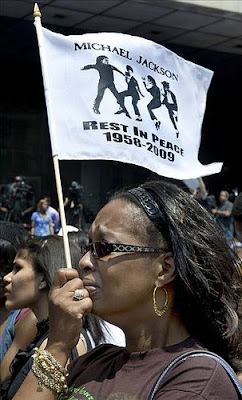 The service itself was often remarkably moving and, regardless of what you may have felt about Michael Jackson, it was hard not to feel a sudden instinctive rush in the tearducts when Jackson's 11-year-old daughter, Paris, sobbed, "I love you, Daddy." Many of the personal anecdotes shared by his friends and family gave one a glimpse into Michael, the person. It was a rare peak behind the face mask and sun glasses that became his public facade.
Posted by Stephen Humphries at 3:06 PM