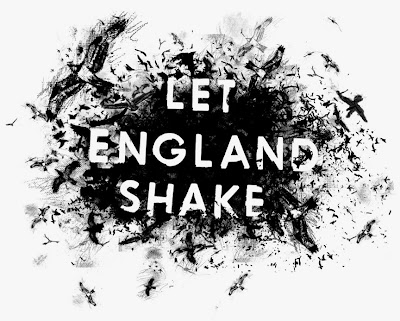 Here's what's been in rotation this month:

ALBUMS
A few words about some of the albums...

It's only February but there won't be many better albums than PJ HARVEY's Let England Shake in 2011. Musically, the album picks up where White Chalk left off -- PJ once again sings mostly in a high register rather than in her low-end voice -- but this record adds more vibrant textures and brighter colors. One or two songs, such as "Written on the Forehead," almost sound Cocteau Twins-ish. Beautiful melodies from start to finish.

It's a concept album about the toll of war on England and its identity. For this record, Polly Jean wrote all the lyrics before she wrote a note of music and so its full of startling imagery. On "All and Everyone," a song about the battle of Gallipoli, for instance, she sings:

Death Hung in the smoke and clung
to 400 acres of useless beachfront
now, and now, and now.
Death was everywhere,
in the air
and in the sounds
coming off the mounds
of Bolton's Ridge.
Death's anchorage.
Death was in the staring sun,
fixing its eyes on everyone.
It rattled the bones of the Light Horsemen
still lying out there in the open

Simply, it's her best work and a consistently exhilarating listen.

I'm very excited by TAME IMPALA, a new psych-prog band from Australia. Strong melodies and immense grooves. They're just about the only band in the world who can claim to have been interviewed by Classic Rock Presents Prog as well as Under the Radar, an indie music magazine I write for.

The new RADIOHEAD album isn't a top-tier album like The Bends, OK Computer, Kid A, and In Rainbows. It lacks the grandeur, thrust, and ambition of those albums. The King of Limbs feels like a lesser work but it is nevertheless a more cohesive album than Hail to the Thief and Amnesiac. These 8 new tracks are beautiful. In fact, this record arguably boasts Thom Yorke's best vocal performances to date. As with any Radiohead record, it's richly textured and demands attentive listening.

PAUL SIMON's last album, Surprise (produced by Brian Eno), boasted one or two cracking tunes, but his new album, So Beautiful or So What (out in April), is his best since Graceland. Once again, he has included African influences in these acoustic-based songs but they're West African sounds such as the kora rather than South African township pop. On this record he reminds me what a great lyricist he is, creating deft character sketches and offering wry wit throughout. It is odd, though, to hear him reference Jay Z!

I am hugely enjoying GREGG ALLMAN's new solo record, Low Country Blues (Rounder). I've had zero expectations beforehand but it's been on constant rotation in this household these past few days.

It's a pure blues album produced by T Bone Burnett (yes, him again) and, apart from one new song co-written by Greg and Warren Haynes, the album consists of cover versions by the likes of Muddy Waters, BB King, Otis Rush, Buddy Guy, Skip James and Magic Sam. The production style is richly atmospheric. T Bone's regular go-to players, drummer Jay Bellerose and bassist Dennis Crouch (both of whom you may have heard on albums such as Plant & Krauss' Raising Sand and Sahara Smith's Myth of the Heart) provide rich texture and finger-clicking swing in the rhythm department. and T Bone Burnett swaps guitar licks with Doyle Bramhall II. There's even horns on one or two tracks. And the in-house pianist on the record is one Mac Rebennack. Indeed, Dr. John lays down an amazingly catchy, yet subtle, piano riff on the final track, "Rolling Stone."

Gregg's voice still sounds wonderfully soulful despite the fact that his vocal chords have probably been marinated in Jack Daniels these past few decades! While the album does feature some of Gregg's signature B3 organ licks, the record sounds nothing like an Allman Bros. album. It's very much its own sound.
Posted by Stephen Humphries at 9:59 PM