Now on Newsstands: Tight but Loose 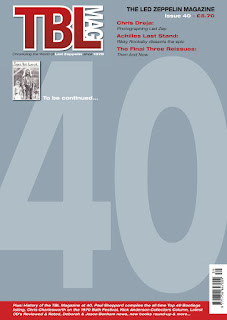 Over the past two years, Jimmy Page sat down for more interviews about Led Zeppelin than at any other point in his career. Of all those many interviews, there were two that stood apart from the rest: Page's consecutive interviews with Dave Lewis for Tight But Loose, the long-running Led Zeppelin magazine.

Most music writers tended to ask Page either tediously generic questions or probed for salacious details about what, exactly, Led Zeppelin got up to inside the Starship, its luxury airplane that included a fireplace. (I doubt an airplane equipped with a fireplace would pass FAA regulations nowadays!) By contrast, Dave asked Page perceptive questions that took readers deep into the creation of music that has withstood the fickle changes of time and fashion. Indeed, Page told Tight But Loose about how the recent deluxe reissues of the catalog, brimming with unreleased material and alternate mixes, enhances the group's legacy.

"It’s like a portal, it’s like a view point into that time when those recordings were made for those particular albums, those classic albums," Page said in TBL issue 38. "And I knew right from the beginning, in thinking about this project, that it was for you, the fans. Because we sort of understand the difference between just hearing Led Zeppelin and really listening to it. I knew that people with that level of understanding would really get off on it, hearing all of these different versions and things that they haven’t heard before."

I first came across Dave Lewis, the world's foremost authority on the band, when he published the book Led Zeppelin: A Celebration in 1990. In those pre-Internet days, the comprehensive guide to the history and recordings of the British four piece was a revelatory education to this young fan. The book, and many others Dave has published over the years, occupy a hallowed space on my bookshelves. His magazine Tight But Loose is also an indispensable read for Zep fans. (It's available as a handsome print publication from here, and also newly available in digital format from here.)

I'm honored to have contributed to TBL over the years. For the 40th issue, I penned an in-depth two page overview about Robert Plant's most recent tour. (I also wrote a short review of Plant's Sept. 2015 show in Boston for Classic Rock magazine.)

Visit http://www.tightbutloose.co.uk/ for details about the magazine plus all the latest news about Led Zeppelin and its members' solo activities.

Posted by Stephen Humphries at 3:25 PM