A few years ago, Clive Owen was touted as the perfect fit for James Bond's vacant tuxedo. Now he's gone and made the movie that "Quantum of Solace" should have been.

I went to see a screening of "The International" tonight and was struck by some of the parallels between the two films. In each instance, the hero finds himself up against shadowy corporations who have untold influence over international affairs -- and even law-enforcement agencies. True to its title, "The International" is a fast-paced travelogue in the Bond tradition as the story moves from Berlin to Milan to New York to Luxembourg to Istanbul. And, in each instance, the villains have exquisite taste in architecture as they plot against the rest of us from inside their boardroom lairs.

In “The International,” Owen plays Louis Salinger, a former Scotland Yard detective who now works for Interpol. The core weakness of the film is that we don’t know jot about Salinger other than that he has seemingly never used a comb, a razor, or a dry cleaner. The rumpled investigator’s sole characteristic is that he has an Ahab-like obsession with bringing down the sinister Bank of Commerce and Credit International, a corporation that has an assassin on retainer and probably has a red phone hotline to Henry Paulson. Salinger has been after the BCCI for so long that he no longer has the capacity to smile. Not even when he meets up with Manhattan Assistant District Attorney Eleanor Whitman (Naomi Watts) to work the case. (Theirs is a strictly professional relationship -- the film at least has the sense to eschew the cliché of the leads falling for each other.) Whitman is a workaholic who, we learn in one scene, cares more about her work than her husband or child. That’s all we ever learn about her. If only first-time screenwriter Eric Singer had made Whitman and Salinger as interesting as their names. Naomi Watts is squandered in a rote role.

The Bond bot of “Quantum of Solace” was similarly one-dimensional, undermining all the character work that made “Casino Royale” great. Moreover, the 007 franchise was so eager to appear cutting edge that its action sequences were edited to the beat of a hummingbird’s wing: No single shot lasted longer than a nano-second. The result was like watching a film on fast forward, rendering the frenetic sequences utterly incoherent.

By contrast, Tom Twyker elevates “The International” through sheer style and old-fashioned restraint. The first real action sequence arrives fairly late in “The International,” but Twyker delivers a classic. When a team of assassins targets Salinger inside the Guggenheim museum, Twyker makes full use of the vertiginous orange-peel spirals of the architecture as hunters and prey circle each other, bullets strafing the walls with the visceral impact of two rhinos colliding at full tilt. It’s truly Hitchcockian in its eloquent choreography. Elsewhere, Twyker, the director of the classic “Run Lola, Run,” sets up a panoramic composition for a stunning rifle-assassination sequence in a public square.

Unlike “Quantum of Solace,” “The International” opts for suspense and tension rather than regularly intervals of action sequences. The thriller isn’t as transcendent as its centerpiece action sequence, but it should easily persuade EON producers Barbara Broccoli and Michael G. Wilson to sign up Twyker to direct Bond 23. 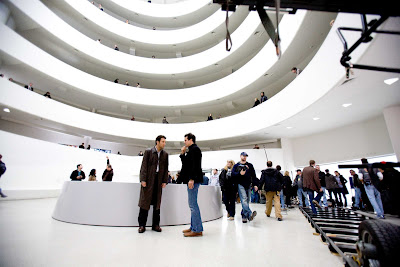 Posted by Stephen Humphries at 9:27 PM