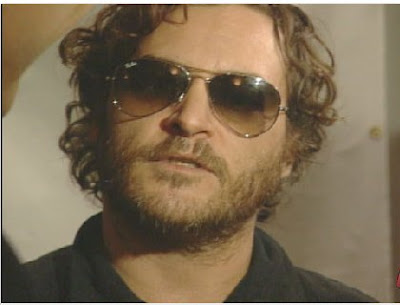 After watching Joaquin Phoenix's obstinate appearance on David Letterman last night -- a career implosion that's diverted attention away from Christian Bale's tantrum -- I thought back to my interview experience with Phoenix several years back.

It happened during my one and only movie junket in New York City. My assignment was to write an in-depth interview profile of M. Night Shyamalan, at that time riding the crest of his hubris just prior to the release of "The Village." Before I sat down for a one-on-one interview with Night -- a charmer who was as curious about me as I was about him -- in his Mandarin Oriental suite, I spent much of the day with veteran junketeers doing roundtable interviews with various Villagers.

As I quickly discovered, the junketeers simply shuttle from one movie promotion to another, staying in hotels paid for by the studio and hoarding as many promotion freebies as possible. (Per newspaper policy, I paid a press rate for my hotel room and politely declined goodies proffered by the platoon of Disney publicists on hand.) Given that the interviews were being held in the Mandarin Oriental hotel overlooking Central Park with no expense spared on catering, I was surprised to hear one junketeer sniff that this junket was nowhere nearly as good as the one Warner had done the previous week.

Given that these journalists -- I use the term loosely, because they're really blurbmeisters -- derive a living from nosing the troughs of Hollywood largesse, the roundtable sessions were full of polite questions. Most of them utterly inane or aimed at eliciting gossipy tidbits. Sigourney Weaver, veteran that she is, was utterly gracious about the whole horse and pony show. Ditto Ron Howard's daughter, Bryce Dallas Howard, in what was touted as a breakout role for her. William Hurt started his roundtable interview by asking each person at the table which publication we were affiliated. When I said, "The Christian Science Monitor," Hurt gave a nod of respect. The actor gave an involuntary snort of derision when the girl next to me said that she was with one of the tabloid magazines ("People," I seem to recall). That must have been uncomfortable for her, but Hurt was nonetheless courteous and engaged and just a little full of himself.

But when it was Joaquin Phoenix's turn, the experienced junketeers were noticeably on edge, a few of them recalling what an awful interview he was. Indeed, Phoenix was surly and clearly uncomfortable doing publicity. (That said, the film's lead actor, Adrien Brody was even less responsive and more awkward.) Given the type of questions Phoenix fielded from the junketeers, I sympathized. How many actors actually enjoy doing several days of tabloidy press for each project? (One full day for the "Entertainment Tonight" type shows and local TV news stations and then one full day for print and Web outlets.) Heath Ledger found movie promotion a particularly tormenting ordeal, as detailed in Entertainment Weekly's recent cover story.

That said, actors should either fully abstain from interviews or proffer a modicum of professionalism about the process. That multimillion paycheck isn't just compensation for the work on set, it's also for the promotion afterward. Studios rely on actors to sell a movie and that entails leveraging one's star power to draw attention to a project. If George Clooney -- a long-time foe of tabloid journalism -- can turn his chagrin into a shit-eating grin come press junkets, anyone can. They can pretend to be enthused, they're actors, dammit.

Which brings us back to Joaquin's appearance on Letterman, the latest in a series of bizarre public appearances. Phoenix is ostensibly promoting his final film role in "Two Lovers." The publicity rounds may be a contractual requirement. But Phoenix didn't even cursorily fulfill those promotional obligations, stonewalling Letterman at every opportunity despite Dave's prompts about costars Gwyneth Paltrow and Isabella Rossellini. If anything, the incident has overshadowed the film itself, a small budget film that needs all the help it can get to break out beyond the art-house cognescenti. Phoenix's behavior is a slap in the face of director and writer James Gray -- who previously directed the actor in "We Own the Night" -- let alone the costars and crew.

Is Phoenix trying to perpetuate a Borat-like joke on the public with all this, as some speculate? Some sort of performance piece that's a commentary on our celeb-obsessed culture? A joke is only funny when the audience is laughing at the punchline.
Posted by Stephen Humphries at 5:38 PM