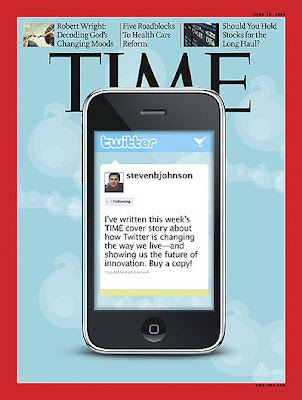 Neil Young's "One of the Days" starts out with the following lyric:

One of these days
I'm going to sit down and write a long letter
to all the good friends I've known
And I'm going to try
And thank them for all the good times together
So far apart we've grown.

I got to thinking about the song, first released in 1992, now that Facebook and Twitter have become ubiquitous. I imagine most people struggle to keep up with all their friends, relatives, and acquaintances, especially once career and kids -- y'know, life -- start to accelerate the daylight hours. For years, many of us have sought to compensate for lack of regular communication by sending out a generic Christmas letter that encapsulates the news and activities of the past 12 months.

Now, social media allow one to post snapshot updates to a wide circle of friends and associates. The appeal of these tools is that we can scatter Haiku-length updates to our extended network and feel as if we're looping them into our lives with minimum effort. (The downside: Some people feel obliged to divulge the mundane minutiae of their lives. Trust me, not even your oral hygienist wants to read tweets about you brushing your teeth.)

Now, of course, the entertainment industry is circling this newfangled evolution of social media and wondering how to best utilize it.

The answer to that question is all in the "how." In our information overload society, Tweets are yet one more tap on the shoulder. As such, you're going to feel less inclined to subscribe to Twitter feeds that are irrelevant and dull time wasters. But, if used smartly, Twitter is a great way for entertainers to connect with their audiences and deepen fandom.

Case in point, Trent Reznor, who used Twitter to great effect, most notably creating news headlines on the Internet when he slammed Chris Cornell's Timbaland-produced album. Later, Reznor used Twitter for a humorous April Fool's joke in which announced that the new Nine Inch Nails album had been produced by Timbaland. (The fake cover showcased Reznor in one of Kanye West's slatted sunglasses.)

Today Reznor announced that he was quitting Twitter altogether because of abusive feedback he's received from various folks. As Pitchfork notes, "It's a shame because Reznor's online persona is one of the most engaging in rock; his interest and participation in the web helped changed his image from a nihilistic angst machine to something more well-rounded and interesting over the last few years."

Twitter is an incredible resource for rock stars. Though the new Twitter feed by favorite band Marillion is a bit of a dud, mainly through lack of activity, the band's keyboardist, Mark Kelly, allows fans a glimpse into his world. Marillion already has the most devoted fans of any band thanks to a familial relationship the band has fostered online.

The keyboardist's tweets -- which range from sad news about his puppy's death to iPhone images of Marillion's singer signing autographs in the airport today -- help to deepen the connection fans feel to their band. And when Kelly drops hints about which songs the band is reinterpreting on its upcoming acoustic album, it serves to generate excitement and sweeten anticipation.

Imogen Heap knows a thing or two about whetting fan appetites. I've been a fan of Imogen's for many years now, own all her albums, and have seen her in concert. That said, I only used to visit her website perhaps once or twice a year. But when the electro-pop princess started filming regular vlogs from her studio I started to pay attention. The songwriter not only plays new music -- sometimes live broadcasts of piano improvisations -- but also regals viewers with her adorably flighty observations. 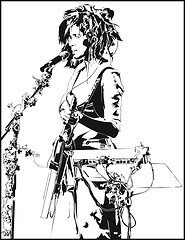 Though Heap's imminent new album, "Ellipse" (which I just reviewed for the upcoming issue of Filter magazine) has taken several years to create, she has managed to maintain and fan interest in the project through numerous tweets. Her mix of honesty and answers to fan questions is without parallel in the pop world. She's even gone so far as to marshal her army of followers to write a biography for her new press release. It's the first crowd-sourced press biography. Heap has also used Twitter to encourage fans to help her create artwork for the album by submitting images via Flickr. Heap is nurturing a grassroots album promotional campaign that other musicians will surely wish to emulate.

The fact is, stars can harness the compulsive voyeurism of our celeb-obsessed society to shape their public image and also break news to their flocks of followers. Since Tweeting is still relatively new and (relatively) uncluttered by stars of the entertainment industry, any celebrity tweets tend to a disproportionate amount of attention due to their novelty. Especially if the tweets ostensibly offer peeks into their lives and make us momentarily believe that "stars: they're just like us." How else to explain Ashton Kutcher's 1 million-plus followers? -- his movies don't exactly pack 'em into the cinema aisles. 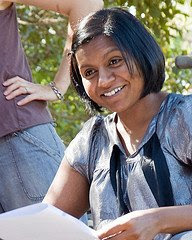 Take Mindy Kaling, who not only plays Kelly Kapoor on "The Office" but is also one of the principal writers of the show. Though she's not one of the highest-profile characters in the show, she can claim 125306 followers on Twitter as of today. It can't help but raise her profile now that she has a development deal for her very own star-vehicle comedy on NBC.

Thank goodness we have Kaling to put the wit back in Twitter.
Posted by Stephen Humphries at 4:05 AM