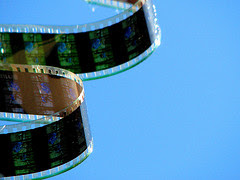 About 10 years ago, I took a brief film-school course in London during which my fellow students and I learned how to use a camera and cut film on an editing machine. How archaic that all seems now. When I attended a screening of shorts competing in Boston's 48 Film Festival, none of the 70-odd entries were shot on film and I got to wondering if, less than a decade from now, celluloid will be largely left on the cutting-room floor, relegated to the scrap-heap of cinema history.

Does film still have a place in a world where all things analogue are being replaced by algorithmic strings of ones and zeroes? Many filmmakers have already made the switch to digital cameras and editing on a computer because its cheaper, quicker, and for Hollywood helmers, lensing films in a digital format allows for digital manipulation and easier insertion of special effects. In the most recent issue of Entertainment Weekly, the director of "Journey to the Center of the Earth 3D," raves that James Cameron's next-gen high-tech digital cameras allow him to view footage in 3-D in the dailies. "Visitors to the set could watch the footage in 3-D as I was filming. This is definitely moviemaking of the future," says Eric Brevig.
That cavalcade of upcoming 3-D presentations is one reason there's a big push now for cinema owners to buy digital projectors. Disney, Fox, Paramount, and Universal are even offering a hefty carrot by way of a subsidy to spur theaters to upgrade. (You'd think the success of "Hannah Montana 3-D" would be incentive enough to spur theaters to invest in non-reel projectors.) For the studios, digital movies offer several advantages, not the least of which is not having to pay for more prints for wide releases. Most of all, studios are banking on 3-D films to lure people out of the living rooms they've transformed into mini cinemas with their albatross-size high-def televisions. 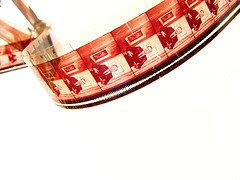 A younger generation of viewers may prefer the look of high-def digital images. Watch a regular DVD and you, too, may find yourself wondering why a movie can't look as crisp as a high-definition TV program on an HD-TV. But what will we lose? Sure, celluloid doesn't allow or the more-real-than-real quality of digital film, but it does have a unique, slightly grainy quality that has a beauty all of its own. So I'm glad Steven Spielberg has the attitude that you'll have to pry his Panavision from his cold, dead hands. Spielberg tells the same issue of EW, "Eventually, I'll have to shoot [and edit] movies digitally, when there is no more film -- and I'm willing to accept that. But I will be the last person to shoot and cut on film, y'know?"
Posted by Stephen Humphries at 9:05 PM