Who is this woman? 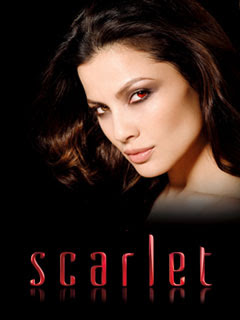 Now in the pages of entertainment magazines and pop-ups on the Web: The words "Scarlet: The hit new TV series 02/28/09" accompanied by a close-up of a sultry brunette, half-shrouded in darkness, with a come-hither look. Problem is, no one seems to know exactly where hither is. Neither the ads, nor the website, nor the trailer say anything about where this TV series is airing.

According to the official website, it is directed by David Nutter ("The Sarah Connor Chronicles," "Smallville") and stars Natassia Malthe ("BloodRayne II: Deliverance," "Alone in the Dark 2") and A.J. Buckley ("CSI"). It even has an imdb entry.
This "Alias" wannabe could be a Web-only series, but that would mean that it had a budget 3000 times that of "Quarterlife." My guess is that it's really some sort of sneaky viral ad campaign.
UPDATE: My guess was correct. The ads were for a line of televisions. As in "TV series" - geddit?
Posted by Stephen Humphries at 8:37 PM