Remember when sharks were scary?

First, take a moment to watch the above trailer for "Mega Shark vs. Giant Octopus." Gotta hand it to the movie -- which should be renamed "Sharks on a Plane" or "Jump the Shark" -- for achieving the impossible. And I'm not talking about a shark taking a chunk out of the Golden Gate bridge. Or the fact that it manages to be the worst thing that's happened to Debbie Gibson since the '90s. Or even its status as the worst movie release since "Manos: Hands of Fate". No, I'm referring to the fact that it makes a Great White shark seem about as scary as "Free Willy."

I remember when sharks were cinema's scariest creature. At the age of 5 or 6, I first became aware of "Jaws." It was the late 1970s and, growing up in South Africa (which rivals Australia as shark-attack central), my childhood visits to the ocean where already fraught with anxiety. As much as I loved to swim (still do), I felt trepidation every time I went out into the waves (still do). But the poster for Spielberg's film -- an impossibly large great white surging from the depths toward an unsuspecting bikini babe swimming on the surface -- made an indelible impression on my young, impressionable mind. Adding to the terror of the image: the cruel serrations in the beast's cavernous mouth. It even managed to surpass the visceral depiction of an actual shark attack of 14-year-old Brook Watson in John Singleton Copley's 1778 painting, "Watson and the Shark." 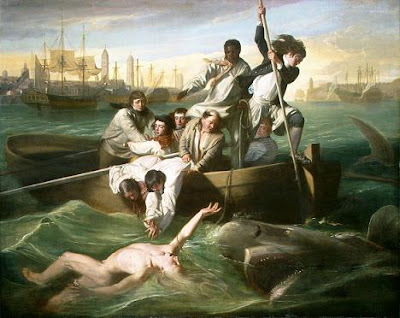 I can only imagine what sort of impact "Jaws" must have had at the time of its release. So, I'm keen to see the new documentary The Shark is Still Working, which examines the movie's legacy in popular culture. Remember, there was no such thing as "Shark Week" on the Discovery Channel back in 1975. People's impressions of the rulers of the deep were likely shaped by lurid reports in newspapers -- not to mention the Peter Benchley bestseller that spawned Spielberg's film -- rather than genteel Jacques Cousteau nature documentaries.

Of course, sharks had popped up in film before. "Thunderball" includes this sequence as well as James Bond's memorable escape from the villain's shark tank. (Sean Connery's expression of terror in the film is real: a shark managed to escape the transparent divider in the pool while the scene was being shot.) But Spielberg's film, for the first time, vividly depicted what a shark attack might look like on film. Or, at least, it made viewers imagine what a Great White's lunch routine might look like. Spielberg smartly left the mechanical shark -- nicknamed "Bruce" -- off screen for much of the film because a) it failed to work b) it loo 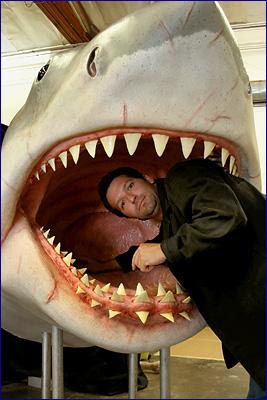 The less-is-more approach made audiences afraid to dangle their legs in the water ever again. "Jaws" was such a megahit -- in retrospect, the first summer blockbuster -- that other studios tried to emulate its formula with films such as "Jaws of Death," "Piranha" and "Orca: The Killer Whale."

I never did see "Jaws" until many years later, but the poster did enough damage to my young psyche on its own. Passing by the backyard swimming pool at night, I'd furtively cast at wary glance at its shadowed depths for signs of a fin even though I knew that was ridiculous. When a babysitter took my brother and I to see "Jaws 3" at a drive-in, she made us duck our heads under the dashboard every time the shark appeared. Oddly, I think that made the movie seem more terrifying than it actually was.

When we were finally old enough to go see "Jaws 4: The Revenge" on our own, it turned out to be a comedy. The shark roars, for starters! Worse, the shark is hellbent on payback -- this time it's personal! -- against the Brody family from the original two movies and so it somehow manages to figure out that the Brody family from Amityville, New England, is off to the Bahamas for a vacation. The shark follows the plane! Michael Caine, the film's star (the human one, at least), once told an interviewer, "I have never seen it, but by all accounts it is terrible. However, I have seen the house that it built, and it is terrific."

Understandably, movie studios swore off shark movies for a while. No one wanted the hassle of making mechanical sharks, let alone filming in water. Until, that is, Samuel L. Jackson's craptastic "Deep Blue Sea" ushered in the digital shark. Suddenly, cheap special effects led to dozens of straight-to-DVD (or straight to the Sci-fi Channel) releases such as -- deep breath -- "Megalodon," "Red Water," "Spring Break Shark Attack," 'Shark Swarm," "Blue Demon," and the "Shark Attack" series. The nadir of the genre (well, until "Mega Shark vs. Giant Octopus") was 2007's "Sharks in Venice," in which schools of great whites patrolled Italy's famous canals to feast on Italian extras and several American film stars.

In short, Hollywood reduced the ocean's most formidable predators -- and cinema's most feared monster -- to villains that are about as menacing as Dr. Evil's sharks with lasers.* And I, for one, don't mind. I've dived with sharks and they're actually beautiful fish. (I feel safe underwater, though I swear I'd become the second man to walk on water if I ever spotted a Great White, Bull Shark, or Tiger Shark during a dive.) They're still depicted as ruthless killers in film, alas, but at least these cinematic stars don't affect us the way Spielberg's creation did. The less we fear these over-hunted creatures, the more we might come to respect them.


* (Honorable exceptions: "Open Water," the docu-style indie film about two divers stranded in the ocean, and the grisly attack sequence in Danny Boyle's lamentable "The Beach" -- y'know, the one in which Leonardo DiCaprio goes all Captain Kurtz to unintended comedic effect.)
Posted by Stephen Humphries at 5:30 PM