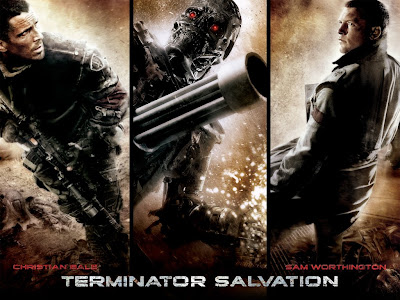 Last week, I went to a screening of "Terminator Salvation" hosted by Australians in Film. I've been welcomed as a guest to several of their movie 'n' mixer events and the Aussies always live up to their reputation as the friendliest folks on the planet. Though Australia's domestic film industry is a tiny one, the sparsely populated nation has exported an astonishing array of directors, crew members, and, of course, actors. (The Australian breakout in 2010 will be Chris Hemsworth, most recently the father of Captain Kirk in the new "Star Trek," and newly cast as the lead of Kenneth Branagh's "Thor" and the remake of "Red Dawn.") In the case of "Terminator Salvation," the Australian connection is the film's star, Sam Worthington. "Who?" I hear you ask. Already a star in Australia, Worthington will next be seen in the lead role in James Cameron's "Avatar." Christian Bale may have top billing in "Terminator Salvation," but it's Worthington's show.

I had low expectations for the movie. After all, the director is McG -- a man seemingly named after a Happy Meal -- who foisted "Charlie's Angels: Full Throttle" on the world. But this fourth installment in the series has much to commend to it amid one colossal flaw (more on that later). Essentially, it's a war movie set in a post-apocalyptic future and, while the look and feel of this grim 2018 isn't as nightmarish as that of Cormac McCarthy's "The Road," the dustbowl environment isn't exactly a Disney theme park either.

I'll say this for McG, he certainly brings a distinctive vision to the whole enterprise and his action sequences likely won't be topped this summer. Indeed, the action film seems to be a lost art in Hollywood. So few directors seem able to replicate what Spielberg and Cameron do so well -- create action sequences that are storyboarded and shot so that the viewer knows exactly what is transpiring on screen. These days, action sequences tend to be a blur of ADD editing where it's difficult to follow the flow of movement. A bit like watching a movie on fast forward. McG, at least, does a fine job on the action front. In one notable sequence, he even provides a pilot's POV view of a helicopter crash.

Overall, I reckon this new film is the third best entry in the series. I wish it had a few more moments of the playfulness that characterized each of its predecessors, though it does offer up one such surprise near the end. That said, the fundamental flaw of "Terminator 4" is that its characters are only slightly more fleshed out than those of the machines. Christian Bale does little more than bark his lines and strike heroic poses. His stubble does all the acting. Worthington gets a stock redemption arc and a teeny bit of existential angst, but his character's evolution isn't explained in the least. At the outset, we're told that his character committed a brutal multiple murder but he has already decided to atone for what he did. We're not privvy to why he committed the crime, nor why he decides to reform himself.

The previous three Terminator films (especially the Cameron films) at least paused to develop its players a little bit. The only truly memorable characters here are the red-eyed machines.
Posted by Stephen Humphries at 12:18 AM